An Oktoberfest Smoothie Bowl has been on my mind for weeks and I finally got to make it. There were some preparations though. What’s in the bowl and why? Read all about it!

There are certain foods connected with the area of Munich and therefore also with Oktoberfest. My idea was to use all the delicious and famous Oktoberfest sweets and add them to a nice bowl of Quark. Of cause, many of you won’t have quark at hand and you can either make some (recipe for Quark) or instead use Skyr or Greek Yogurt.

So, with Quark as the smoothie base, I thought of turning it in some kind of Blackforest Cake Smoothie. In my mixer, I combined half of the quark with Cherries and the other half I mixed with some Nutella and Cocoa powder. Then I filled both smoothies next to each other into the bowl. 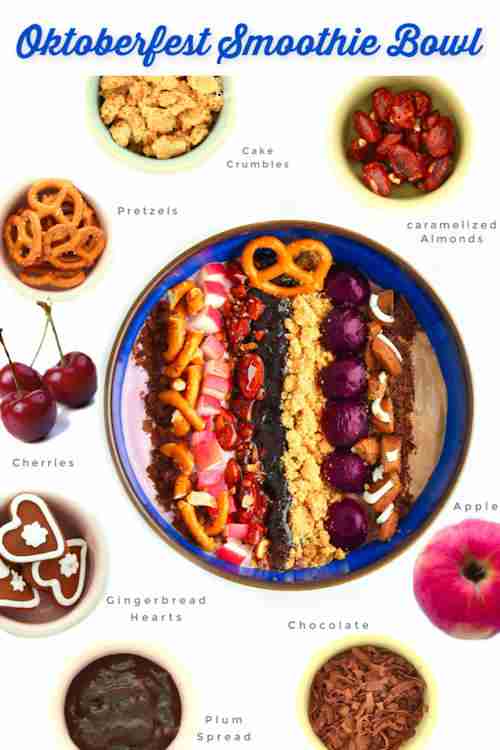 On the middle line on top of the Quark, I used some of my delicious Plum Spread (recipe here) which we usually use as a filling for our sweet dumplings (Dampfnudeln / Germknödel) or like jam on our breakfast rolls.

What’s on the Right Side?

Then I made a simple 3 ingredients dough for cake crumbles but instead of putting it on a cake, I put the crumbles on a baking sheet and baked them until they had this nice, golden brown color. After cooling, I put on the right them next to the plum spread.

Next to this, I put some cherries. Sadly, they were already out of season here in Texas and I had to settle for some cherries from a can. No question that this bowl would look perfect if the cherries were fresh but sometimes one has to compromise.

Now, the gingerbread hearts I baked a while ago and the really nice thing about gingerbread hearts is, that they can last forever and still taste like I just baked it. But cutting these little cuties into smaller pieces, kind of broke my heart a little, too. They look so nice with the white glaze decoration! Find the recipe for the traditional Oktoberfest Gingerbread Hearts here! At the Oktoberfest, they are a MUST to buy for a loved one. You will get much larger ones than those I used in the Oktoberfest Smoothie Bowl and usually have a sugar writing with a LOVE note on it like “I liab Di” (I love you). 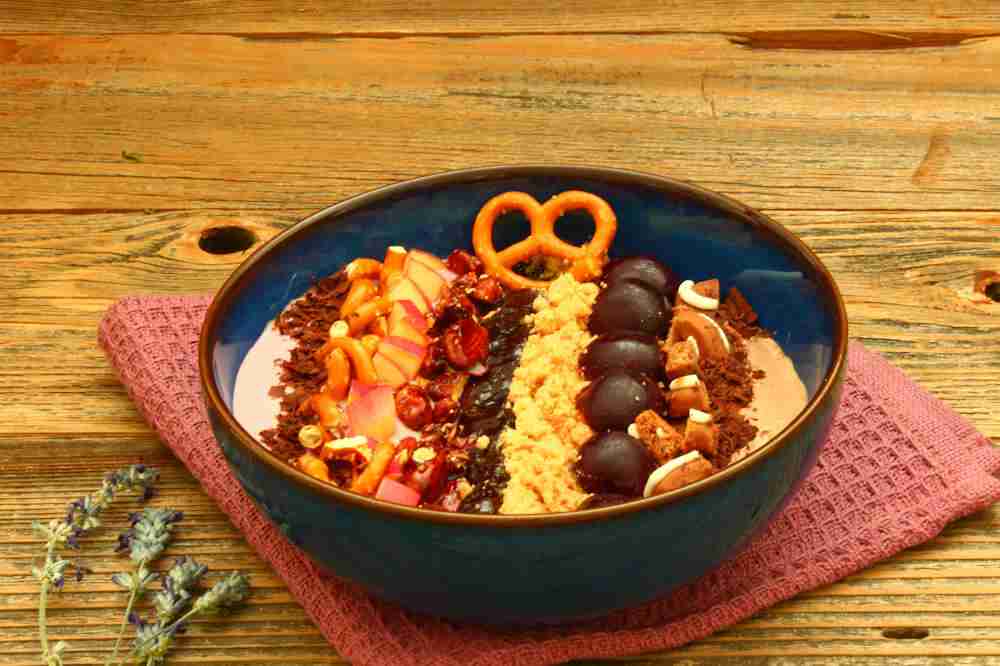 On the left of the Plum spread, I put some caramelized almonds. I had to cut them into smaller pieces and almost cut myself while doing it but got away unharmed. They have a nice taste of cinnamon and their crunch was just what the bowl needed! The Caramelized Almonds are sold at the Oktoberfest and at German Christmas markets. Careful: If you had one, you want them all! They are a highly addictive treat :-)

Next to the almonds are small apple pieces. They give the smoothie bowl a fresh, juicy taste and there are two reasons why apples need to be in that bowl: First, they sell caramelized apples at the Oktoberfest and second they are the main ingredient in Apfelstrudel (Apple Strudel), which I will cover in a recipe very soon!

I think it’s obvious why I had to put some little pretzels into the Oktoberfest Smoothie Bowl don’t you agree? But for those who only know pretzels from their mall: Munich is the mother cell of all Pretzels! (OK, and Stuttgart, too) and there is no way around it: The pretzels in Germany are so much better than here in the US. But I won’t get into this because I might rant a little, especially after I recently bought a pretzel in Dallas at a venue. I had to throw it away after one bite because it was not really edible.

Finally, at both sides of the toppings, I made a line of shaved chocolate because this is what we put around our Black Forest Cake and I wanted to make that bridge between the base and the toppings.

Well, words can’t describe it but I will say this: I shared the smoothie bowl with my daughter and we both agreed that this is the absolute best smoothie bowl we ever had and probably ever will have!

Did I have to put some work into it with some of the toppings? Yes. Was it worth it? Absolutely yes! And since I still have some and made more Quark overnight, I am going for a second round today! 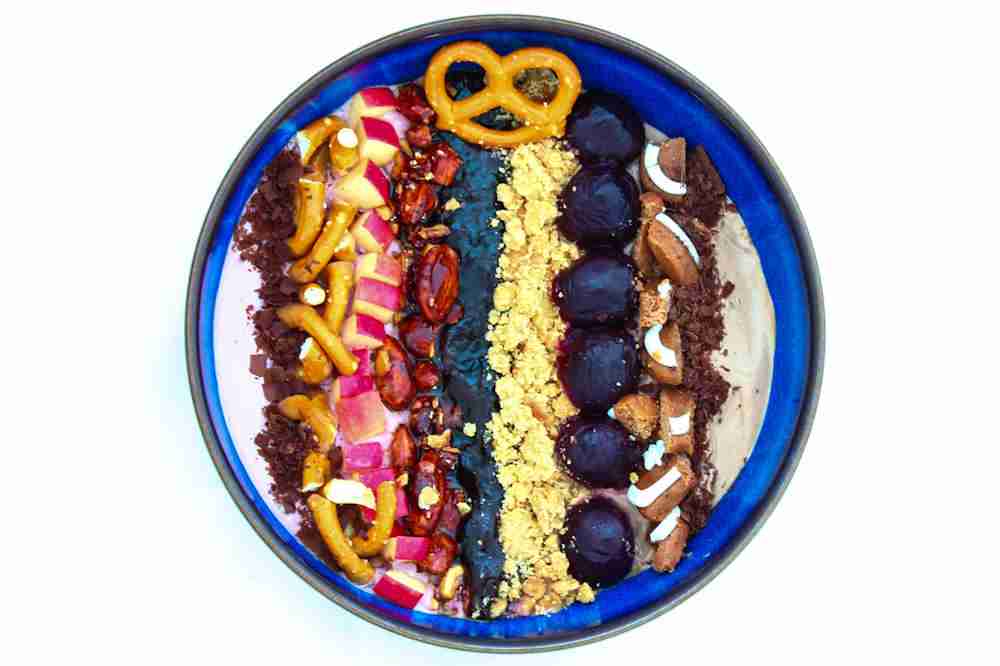 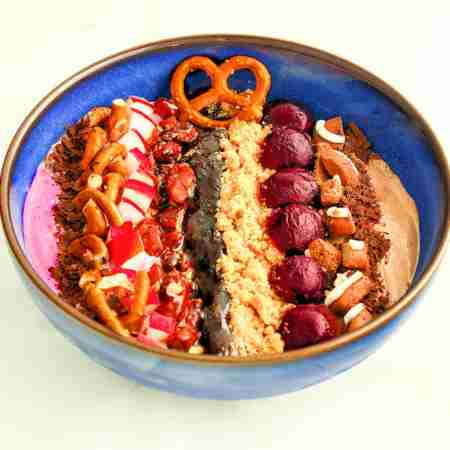