Why is Oktoberfest celebrated?

Home » Why is Oktoberfest celebrated?

Most people have heard about Oktoberfest and many places in the US celebrate it, trying to copy the Munich original, but why is Oktoberfest celebrated anyway? Also, since when is it celebrated?

You have to travel back in time a little bit to find the first Oktoberfest celebration: Oktober 12th 1810 was the day of the wedding of prince Ludwig I. (son of the Bavarian king Maximilian I.) and Princess Therese. They became King and Queen of Bavaria in 1825 after Maximilian’s death. For their wedding, however, there was a horse race and some festivities with a little parade of children in their traditional clothes (dirndl and lederhosen) and everyone loved it. They repeated the horse race the next two years. In 1813 they had to cancel because they were in war with Napoleon but in later years they celebrated the horse race bigger and bigger and more attractions were added – even a flea circus which still exists. Today it is like a big, drunken carneval with huge, colorful parades and lots and lots of beer. But that’s not all there is to it.

Ok, let’s face it: The weather in Germany often sucks! That’s one of the main reasons why we live in Texas now: I need more sun!
Even in the south of Germany, the Oktober can be already cold and rainy and even a snow storm is possible as it happened in 1829! That doesn’t work well with the fest. So the idea to celebrate earlier came up pretty soon. But the area surrounding the Theresien Wiesen was agriculturally and putting the Oktoberfest in September would have collided with the harvest. So only after the fields had turned into building land it was possible to move the Oktoberfest to the end of September.

There are strict rules about beer in Germany anyway, but Oktoberfest additionally has it’s very own rules when it comes to the beer they sell. In general, Germany has the German “Reinheitsgebot” (German Beer Purity Law) which guarantees the beers pureness. This law goes back to the year 1487, was updated in 1516 but these laws only applied to Bavaria. North Germany had a different beer and until this day the beer in North Germany tastes very different and is much stronger than the Bavarian beer.

What makes the Oktoberfest beer special, is a firmly hopped beer (13.5%) that is brewed in one of 6 breweries in Munich in March. No beers from outside of Munich are allowed to be sold on the Oktoberfest.

The beer is served in a large glass mug, called “Maß” and has an exact capacity of 1 liter.

The famous parade does not go back to the wedding, though there has been this little parade with the kids. Today’s parade of the breweries started back in 1935. The parade starts with a woman, dressed in a black and yellow monk habit, she represents the “Münchner Kindl” and is followed by the carriage of the mayor of Munich and those of other important politicians. 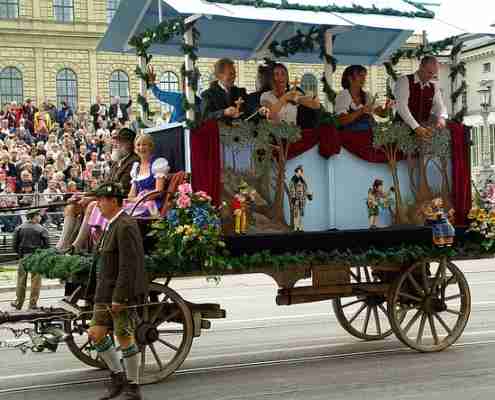 Behind them are following the breweries with large horses pulling the carriages with wooden barrels of beer.

They are accompanied by the bands which also make the music in the beer tents. 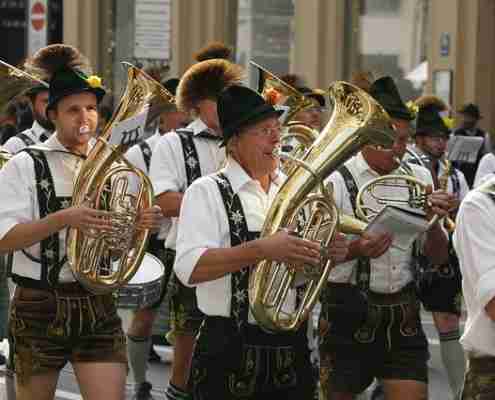 There are also other parades where the people of the different regions of Bavaria show their traditional clothing styles. Often there are also “shooting clubs” (Schützenvereine) with their club attire. 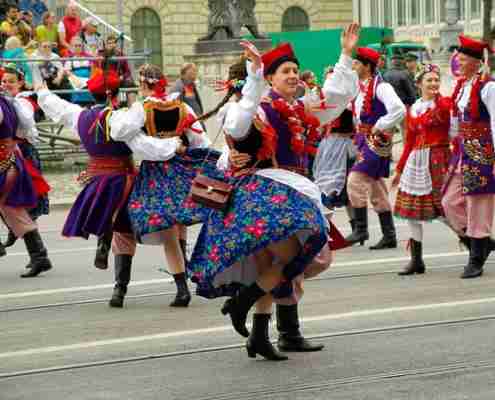 The mayor of Munich has the honor to open the first barrel. 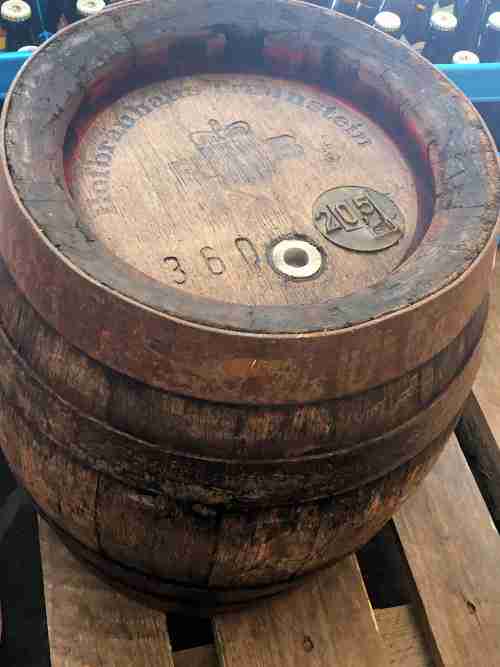 He has a huge wooden hammer to open the barrel and everyone counts the blows he needs to open it. The worst record is at 17 blows (quite embarrassing), the best at 2 blows. Once the barrel is opened and beer flows, there are 12 shoots of some sort of firecrackers which is the signal to all other beer tents to start serving beer, dance, celebrate and just have fun. 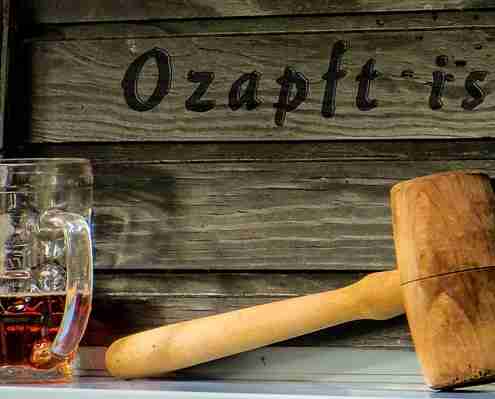 There is about 7 Mio. liters of beer sold at the Oktoberfest.

About 0.5 chicken (Wiesn Hendl) are sold.

The electricity for the Oktoberfest is a special challenge. To run all tents, kitchens, lights and carnival attractions a lot of power is needed. To avoid power outages (which could lead to panic) there are two separate power stations and every lamp etc. is connected to those two separate circuits.
The entire logistic for mobile phone reception, gas delivery, toilets, water, waste etc. is gigantic and probably a masterpiece of German planning and engineering.

Every year visitors try to sneak out their Maß glass. This is a serious case of theft and there is special staff making sure to catch those thefts and bring them to justice. Instead of stealing, visitors could just buy one as a souvenir. The souvenir version of a Maß simply has a special plaque to tell it apart from those of the brewery.

There are several live webcams at the Oktoberfest and here is a link to watch: https://www.wiesn.tv/livecams 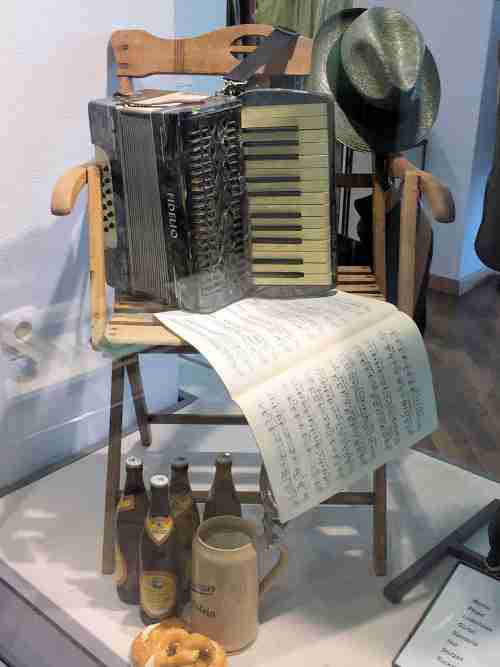