Whole Wheat bread with sunflower or other seeds is one of the most common loaves of bread in Germany. We often call it “Vollkornbrot” but there are many, many versions of Vollkornbrot. However, this one is really very authentic to the one I got at our bakery in Germany and that’s why I love it so much.

People often get confused about the bread designations of German bread and to be honest, we Germans do too. When we are at the bakery, we often select our bread by telling the baker “Das da!” (“This one”).

Every bakery has a bunch of standard bread but also some bread that is unique for this bakery by the mix of seeds or the flour they used or other features and ingredients. They have names like Weltmeister Brot, Aronia Walnuss Brot, Angeschobenes, Apfelweinbrot, Alemannenlaib, Bayrisches Hausbrot, Das Kernige, Das Echte, Frankenbrot … and so on. It’s crazy! So, just to bring a little clarity into this. The normal German person mostly differs between Schwarzbrot (including Pumpernickel, Vollkornbrot, Feinbrot – also known as Graubrot or Mischbrot), Roggenbrot, and Weißbrot. And it is especially the Schwarzbrot which has so many variations with seeds and nuts. So, this recipe is probably of the category Schwarzbrot but that might be debatable.

Video: How to bake Whole Wheat Bread with Sunflower Seeds

Pumpernickel is in a way a Schwarzbrot but it contains larger amounts of molasses and is more dried than baked. It has a slightly bitter taste and I have a recipe on the blog HERE which resembles a Pumpernickel.

However, the regular Schwarzbrot is usually made with rye flour but in more southern regions it can also be made with or contain whole wheat flour. The reason for this is the soil and climate of the different regions of Germany. While in the North of Germany, farmers mostly grow rye because of soil, rain and colder temperatures, the South of Germany is more likely to grow wheat. So traditionally there is more rye baking in the North than in the South.

You could bake your bread with rye flour but it really gets a lot more fluffy with whole wheat flour while rye bread tends to be a lot more dense. Since it is WHOLE wheat, it is healthy, too. But for those who want to avoid any wheat flour, there is a recipe on this blog for a 100% Rye Bread.

If you want to bake this bread with rye flour instead of whole wheat flour, you need to increase the water by 5% to 10% for all water parts. You might also want to increase the amount of salt a little bit like 2 additional grams.

I like baking with sourdough since it gives a bread more character (taste) and keeps it fresh longer. But I know that many people shy away from sourdough since it seems complicated to maintain the starter. Nevertheless, I have an article about sourdough starter and maintaining it HERE if you want to give it a try. If you’d rather stay in your comfort zone, don’t worry, you can make this bread with yeast instead of sourdough! I’ll mention it in the ingredients. 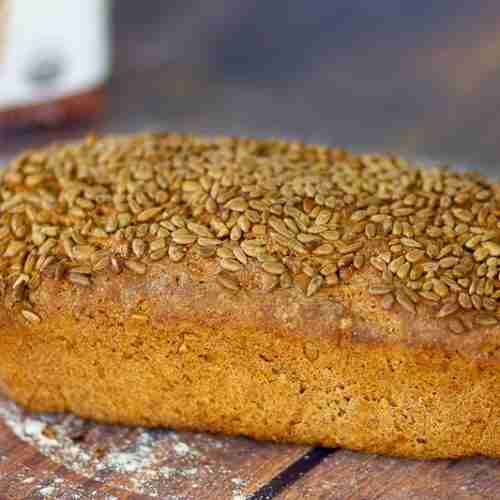 Keyword baking, Bread, vegan, vegetarian
Tried this recipe?Let us know how it was!