Walnut Bread in a Jar

Home » Walnut Bread in a Jar

Walnut Bread with figs, baked in a jar! Great as a giveaway to friends and neighbors.

First of all: You can do this with any bread recipe! But this walnut bread with figs is really delicious. I highly recommend baking it as I describe it in this post, before experimenting with other bread recipes.

For legal reasons: I do not guarantee that your bread in a jar is safe to eat after several days. I do not take responsibility for any harm that may or may not have been caused by eating canned bread. Everyone should make their own decision, and do their own research about whether this is safe or not. While several articles in the US warn of Botulism with bread and cake in jars, it only seems to be a concern on German outlets when using inpropper methods.

It seems that American articles referr to breads and cakes that are only baked in jars and then closed while in German articles breads and cakes in jars undergo an extra step after baking. So, please be aware of ALL the steps I describe in my post/recipe.

Video for Walnut Bread in a Jar

Why Making Bread That Lasts up to 6 Months?

I’m not a prepper but I like to be prepared for the little “crisis” which for a German is: Not having any bread in the house!
So, while I always have bread in the freezer, I also like to have some canned bread in the pantry. Why? Well, I live in Texas and the power is off quite often, especially during thunderstorms and hurricanes. Especially hurricanes require us to always have some food that doesn’t perish fast and can be prepared without water and electricity. I keep a whole box of this kind of food and other emergency supplies in a corner under our stairs.

I also bake this bread in a jar to give to my son in college. He doesn’t need a whole loaf of bread since he is having some meals on campus. The canned bread has just the right size for one person to eat it before it goes bad.

How To Can Bread

There are several things you should pay attention to, before, while and after you bake canned bread.

We put flour in the jars to make them glide out later. I recommend doing that. But it looks kind of ugly and could be mistaken for mold. Some people use breadcrumbs instead of flour, you should consider it.

For the pictures, I removed the bread from the jars and cleand the jars before putting the bread back in … that is just a picture styling thing. 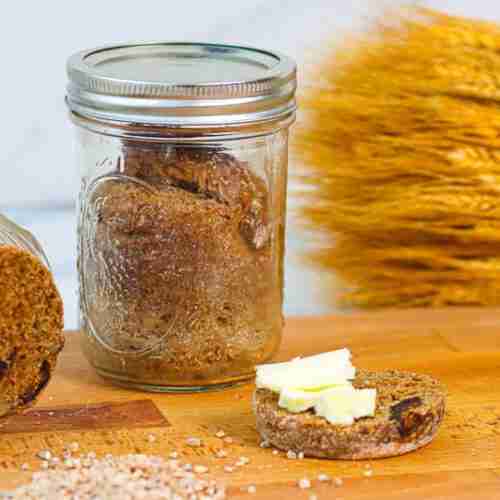 Walnut Bread in a Jar