We got stuck on a mountain during a heavy thunderstorm in the Alpes and gladly made it into a hut that was also a restaurant. We sat down … damp and a little clueless about how long this storm might take and how we could get back to our hotel in the valley. Meanwhile, we ordered something to eat: Käsespätzle! (Cheese Spaetzle)
Never in my entire life, I have seen my kids eat like a crowd of vulture! They fought over every single bite, despite the fact that they have had a really good breakfast not too long ago.

I can still remember my first Käsepätzle: When I visited my grandma in Augsburg we went on a hike along the Ice channel that once had been built for the Olympics. We decided to rest at an inn and she ordered me Käsespätzle and I was sure that Cheese Spaetzle is the best food I’ve ever had – just like my kids.

Today, I often cook this for guests, especially if I there is a majority of men. Not that it wouldn’t please a woman’s tongue but it has quite a bit of fat and calories, which bothers us women more often than men, right? Also, there is a lot of bacon in it – men’s candy!

The whole process of making Käsespätzle is easy but it always leaves you with a little mess in the kitchen. But don’t worry, it’s not that bad. Expect to need a bowl for mixing the dough, a large cooking pot, a strainer, a Spätzle-Presse (available at amazon), a cutting board and sharp knife, a skimmer, a casserole or iron pan … basically, everything that won’t fit easy into your dishwasher ;-) 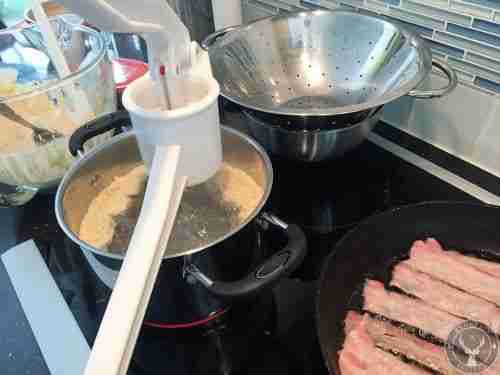 The result is worth every effort, just trust me on this!

Tipp 1: I often double the recipe and freeze half of the Spaetzle or Käsespätzle in an aluminum pan. This way I have some in reserve and just need to put it into the oven on a day when I have less time for cooking.

Serve your Cheese Spaetzle with a green salad and fried or caramelized onions. 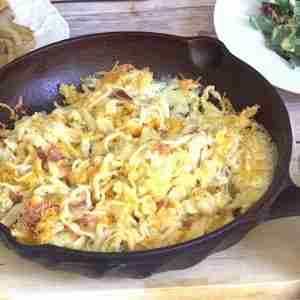 When I bought my Käse-Presse about 23 years ago in Esslingen it came with instructions. These claimed that original Spätzle are only made with flour, salt and eggs. No water, no milk. For a couple of years I made my Spätzle with that recipe until I tried this recipe with milk and water. Not only that it tastes better, it is a lot less heavy ... also it might be healthier than 6-10 eggs! BTW: Esslingen is one of the most beautiful towns I've ever seen in Germany! Worth a visit!!! A Spätzle-Presse is quite expensive here in the US but worth the money and might last for generations! They also offer a "Spätzle Hobel" a sort of plain with a pusher: Don't go for that one, it requires a lot more work and will just take up a lot of time. A word about store bought Spätzle: They can sometimes be an alternative to the DIY version but will never ever (!) even come close to the taste of homemade Spätzle. It's a huge difference!
Tried this recipe?Let us know how it was!