Sauerbraten is translated to Sour Roast and is a German pot roast with a slightly sour taste for the meat and also for the gravy. To counter the sourness of the ingredients like wine and vinegar, some sweet ingredients are added.

My recipe for Sauerbraten is probably closest to the Rhineland version with a hint of Swabia in it. And while in Rhineland, in the past, it was common to use horse meat for this dish, it was usually beef that was used in other regions. Similar variations of this meal also exist in other European countries but though I am not entirely sure, I believe it originates from Germany.

In this post, I will publish two recipes for Sauerbraten: A traditional German Sour Roast and a version that one of my followers, Martin Par, sent me. He highly recommends his recipe and I think it is worth trying, too. So, thank you, Martin, for sharing your recipe with us and letting me publish it!

The traditional Sour-Roast was made with meat that was rather tough like the meat of an old horse or certain parts of the cattle. To make that meat tender, the meat is soaked in a marinade for at least 5 to 7 days or even more. The vinegar in the marinade is crucial for making the meat tender but the wine and spices give it a delicious and unique taste.

I would advise you to keep the roast in the fridge during the entire marinade time.

Raisins or No Raisins?

The Rhineland version of the recipe asks for raisins and I think they really make a difference when it comes to the taste of the gravy. Other regions like Swabia, usually don’t have raisins in the recipe. You decide what you want to make out of that! 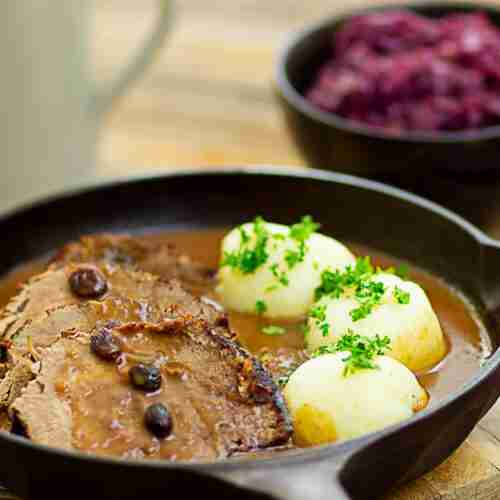 For the Roast &Gravy

Keyword meat, pot roast, roast
Tried this recipe?Let us know how it was! 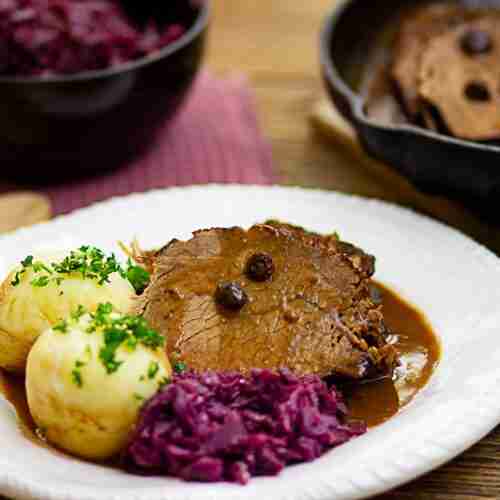 Keyword meat, pot roast, roast
Tried this recipe?Let us know how it was!


Get in on amazon