Schupfnudeln or Potato Noodle is a sort of German Potato Dumpling from the region of Baden-Würtemberg which is in the South-West of Germany. 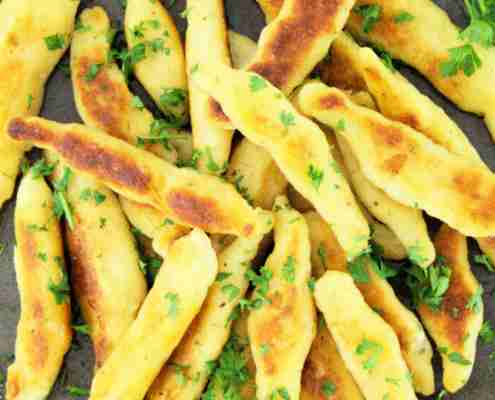 Though making Schupfnudeln requires some work, they are absolutely worth spending the time. I always double (sometimes even triple) the recipe and freeze some of them for later. These Potato Noodles are typically a side i.e. for a roast. They taste great with some gravy. However, they can also be served without anything else or just with some mushroom sauce (try it with the sauce from the Schnitzel recipe!). Fried in butter they are supposed to be slightly crisp on the outside and soft on the inside.

Another way to serve potato dumplings is the sweet version. You fry them with some apple slices, serve them with a vanilla sauce and sprinkle some sugar-cinnamon mix on top. I showed this in a video where I did it with Gnocchi.

Talking about Gnocchi: They are made the same way but have a different shape. But if you think you could just go and buy some Gnocchi instead of going through the trouble of making the Schupfnudel recipe, you should know that there are worlds between homemade and store-bought Gnocchi / Schupdnudeln. You just can’t compare the taste, homemade is so much better!

Also, though it’s the same dough, Gnocchi still taste different. It’s like the difference between Spaghetti and Farfalle: They are made with the same noodle dough but have a different shape. They taste different! Weird, right?

Let me quickly break down the steps of making Schupfnudeln:

The shaping takes some time, great for watching HGTV while doing it! 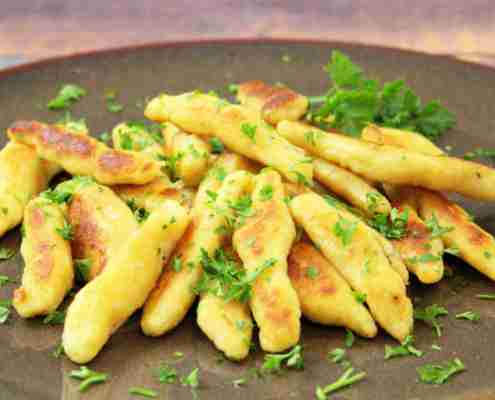 If you want to make a batch for the future, then you prepare the Potato Noodles all the way to step 4 and let them cool. Next put them in a freezer bag or reusable freezer container. Lay them out flat, so they don’t stick together too much. Freeze them.

When you want to use them, just get them out to thaw, then fry them in some butter and they will taste like freshly made! 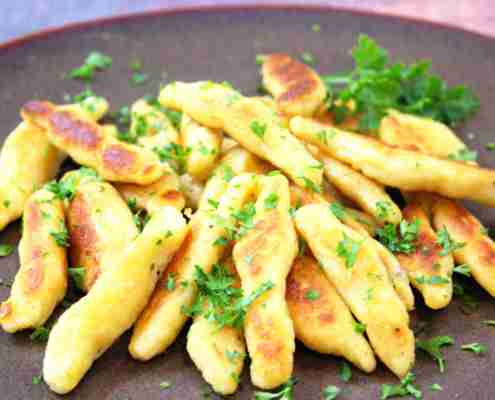 Gram to lbs or ounces

Some visitors have asked me to add the customary system to my ingredients. I thought there is a plugin for that but couldn’t find it. Instead, I used google to convert the metric numbers into customary measures and I realized: Y’all must have a scale, how else would you measure potatoes (since they don’t fit into a cup, lol)? Anyways, I added some customary info to the recipe but I still highly recommend using the metric system and a scale since it is way more precise and will increase your chance to end up with the right dough. 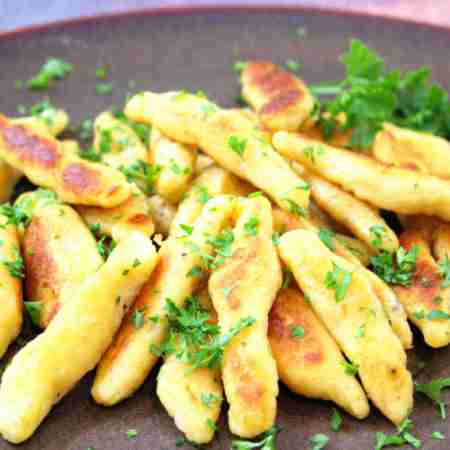 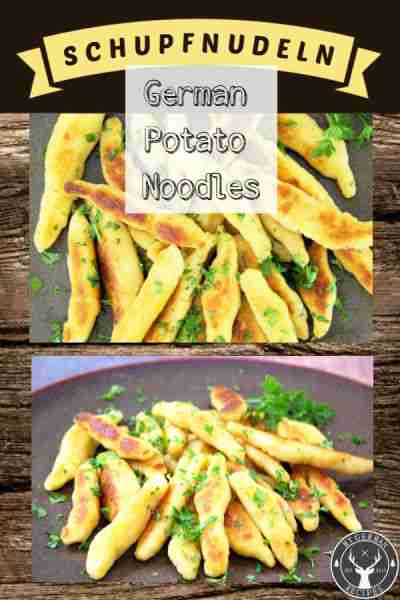