Santa, Saint Nikolaus and the rest of the Holy Mess

Home » Santa, Saint Nikolaus and the rest of the Holy Mess

Today is December 6th, which means that last night my kids polished their shoes and put them next to the entrance – or in our case fireplace. Weird, I know.

This goes back to a German tradition which is called “Nikolaus Tag” (Nikolaus Day). It is the birthday of Saint Nikolaus who lived in Myra which is now “Demre” in Greece, and this is his story:

The story of Saint Nikolaus

Nikolaus was a rich man who inherited great wealth from his parents. When his neighbor lost his fortune and was forced to send his daughters to go an beg for money, Nikolaus (not a Saint, yet) wrapped some gold in fabric and secretly threw it through their window. He later sold everything he had and gave it to the poor. He became the bishop of Myra and there are several miracles they say he is responsible for after his death. He later was made a Saint, who protects the sailors and travelers. Now every year on his birthday, he brings gifts to the children who behaved nicely. In some areas, they say he is accompanied by “Knecht Ruprecht”, who carries a rod to hit children who have not been nice. Those kids who were nice will find sweets and treats in their shoes on the morning of December 6th.

In some areas, they don’t use shoes but little ships or special plates to fill. There is even a children song to sing the day before. In my childhood, we would find tangerines, nuts and oranges, some chocolate and a small gift like a pair of socks or a little book in our shoes.

From Saint to Santa

If you feel like this sounds a little similar to Santa, you are right and it is no coincident. So here is the totally weird story of a mix up that has happened over time between the Catholic and the Lutheran church.
When Martin Luther separated from the Catholic church, one of the things he criticized about the Catholics was the worship of saints. Because of that, he could no longer sustain the tradition of Saint Nikolas. But the families following him didn’t want to lose this tradition since it was so nice for the children (and probably encouraged them to be nice all year). Therefore Luther had to come up with a solution. He decided to have the gift giving moved to December 24th, the evening of Christ’s birth. He announced that the baby Jesus brings the gifts to the children. So from then on the Catholic children got their gifts (or rod) on December 6th from Saint Nicolaus and the Lutheran children got their gifts from baby Jesus on December 24th.

However, over the time, people forgot of the origin of these traditions and somehow this all got switched and distorted. Immigrants from the Netherland brought the Saint Nikolaus tradition to the US and in later years Saint Nikolaus became Santa. The Catholics didn’t recognize him any longer. Instead, they now claim that Santa is not Christian and we should all go back to get our gifts from baby Jesus as it’s supposed to be. Wait, what? And it gets even better: The baby Jesus idea has turned into the “Christkind” (Christ child) which is represented by (hold on to your chair) an angel-like girl with blond, curly hair. Now since about a century, we in Germany all celebrate twice in December: Saint Nikolas day with gifts in shoes and Christmas with gifts under the Christmas tree (which by the way is a pagan tradition). The big winners are the children while the parents get quite a bit of additional stress with their sugar rush children.

Santa and the Christkind have become religious opponents and since the majority of Catholics are living in the south and midwest of Germany and most of the Lutherans live mainly in the north of Germany, they are selling different chocolate figures in the areas: In the south, you can see Nikolaus and Christkind chocolate figures on the shelves of the grocery, while in the north you will find Santa chocolate figures. Kids get really confused if a Lutheran child moves to the south and suddenly claims that Santa brings the gifts or the other way around and parents mostly struggle to explain it.

This may or may not have played a role when the Catholic preschool in Bavaria didn’t want my sister and me in their facility (my mom is from the north, therefore Lutheran). It took a tantrum from my aunt to get us in … but that’s a different story. So I went to a Catholic preschool and got exposed to Saint Nikolaus in person, as you can see in this picture.

Nuremberg has one of the most famous Christmas markets, called the “Nürnberger Christkindel Markt”. A girl with a costume and wig is representing the Christkind that looks like a blond angel. I really have no clue how that can make sense to anyone. 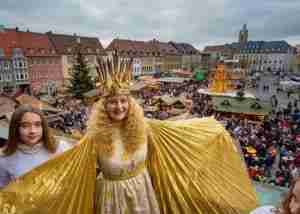 So, this is what the December 6th is all about. It’s weird but still better than the Elfe on the Shelve, that keeps you busy for so many nights while you are running out of funny ideas how to present him or her.

2 thoughts on “Santa, Saint Nikolaus and the rest of the Holy Mess”