This poppy seed cake might look a little weird with the black color but believe me, once you had a bite of it you will be all in for more!

Poppy seeds (latin: Papaver somniferum) come from the same flower that makes opium but don’t worry, you won’t get high from these seeds. It’s being tested thoroughly for any traces of opium. This said I must confess that this cake is highly addictive and you want to bake it again and again … but only because of the amazing taste!
However, if you have a drug test coming up soon (like for a new job opportunity), I would wait to eat this cake until after – just to be on the safe side!

Poppy flowers are mostly grown in the Middle East and Greek but also in some parts of Germany. I’ve read that the best poppyseeds come from Australia.

In ancient Greece, cakes made from poppy seeds and honey were some sort of body builder food. This made me wonder what the health benefits of these seeds might be and look at that:

That’s a lot of good stuff in there and gives me a really good feeling about eating this cake.

You can find a poppy seed cake in all German bakeries, it is some sort of “must have” inventory and if they don’t have it, then it’s probably because they ran out of it.

Often the poppy seed cakes from the bakeries are very, very sweet. That is nice for the first two to three bites but after that, I often feel overwhelmed from so much sugar. That is why I prefer to bake it myself and use the amount of sugar that suits me. Sugar should always be an ingredient instead of a filler!

This poppy seed filling is easy to make, it’s not much more than making a baby puree. But the poppy seeds need to be ground before you use them. I wish one could buy them ground but after grinding poppy seeds, they become rancid very fast. For that reason, Germany sells the complete poppy seed fillings where they are already processed and mixed, ready to use. Here, I must grind the seeds in a coffee grinder and add them to the other ingredients of the filling.

You can add things like raisins, rum, chopped almonds, dried fruits … to the filling, to make things even more interesting. I like some rum-soaked or water-soaked raisins in the filling. In general, a bit of rum or rum extract is a good idea, too.

Can I Freeze Poppy Seed Cake?

Yes, this cake is great for the freezer! I cut it into rectangles and then put these into a large glass container and freeze it. If I want a slice (or more), I take it out of the container and put it into the microwave for 30 seconds and the cake is like freshly baked. One can of cause also just let it thaw at room temperature.

How Much Cake Do I Need?

This is the kind of cake where everyone would love to have a second slice but simply can’t because they are full. Poppy Seed Crumble Cake is so filling, some even struggle to finish the first slice. But some people might surprise you, so maybe plan 1 and 1/2 slices per person and if you have a leftover, just freeze it and enjoy later.

Having coffee and a slice of cake is a tradition in Germany, especially on the weekend and when you have someone visiting. It is usually happening around 3 pm that we brew some coffee and set the table with cake and cookies. We sit down for that and have a nice chat (undistracted from TV, devices or other things!). It is a sort of quality time and somewhat holy to us. I honestly miss this. The most fun is when we have poppy seed crumble cake and at the end of the afternoon, everyone has poppy seeds between their teeth and looks like having lots of cavities. I wouldn’t recommend having that cake at work though … or at least have a toothbrush with you for after the cake.

Ingredients you can make yourself 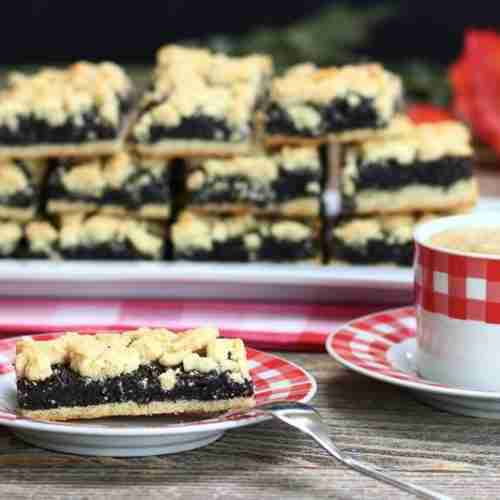 For the dough and crumbles

The dough and crumbles