Here is another childhood memory: Pickled Sweet & Sour Mustard Cucumbers! It’s a very traditional North German recipe. My grandmother used to make them all summer and we’d eat them as a side with many meals like Bauernfrühstück or just for dinner with some salami bread. I’m usually not very much into pickles but THIS is different!

It’s no secret that I have a sweet tooth and there is quite a bit of sugar in the vinegar mixture. It gives the cucumbers a slightly sweet taste and takes away some of the sting from the vinegar. No wonder, my kids and my husband like it very much, too. As stated in the video: My cucumbers in the garden can’t grow as fast as my family is eating these Pickled Sweet & Sour Mustard Cucumbers.

Let’s be honest: Who is still pickling when there is the invention of freezers? I am usually not up for the pickling challenge and making jams is as far as things in jars go for me. But the taste of these cucumbers is worth making an exemption and maybe – just maybe – I will do more pickling in the future so I don’t have to freak out every time we have a longer power outage here in Houston.

So, since I am not into the whole “can it, boil it, use a preasure pot …” thing, this is a surprisingly easy canning project that even a total beginner can manage. And in fact, the result is edible after just a few days and has the most delicious taste! All you need to do is preparing the cucumbers (peel and remove seeds) and then bring the mixture from vinegar, water, sugar, salt, and spices to a boil and put everything into jars. Done! It’s so easy, it almost feels wrong. 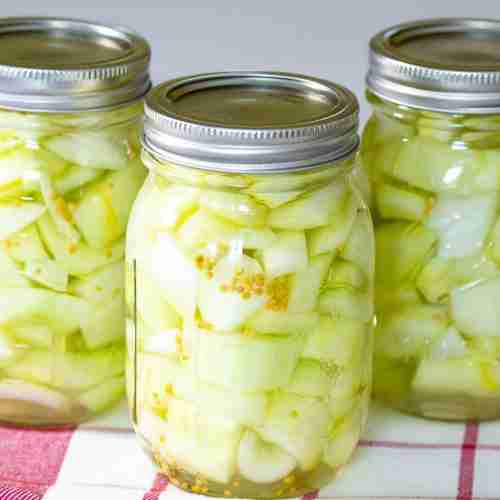 Keyword pickling, vegan, vegetarian
Tried this recipe?Let us know how it was!