I can’t describe how delicious Cinnamon Stars are! To make the perfect cinnamon stars, you need to try my recipe and method and you will not regret it. This is how Christmas tastes in Germany!

There are some recipes out there that are more straight forward and faster but if you really want your cinnamon stars to look & taste their best, then you should stick to my recipe. Yes, it takes longer, but it’s worth it.

How to bake Cinnamon Stars Video

What I Do Differently

Letting the dough rest for some hours is nothing new and most recipes recommend it. I let my dough rest overnight, this way it develops a lot of great taste. I also use a different cinnamon, more about that later.

So overall there are three waiting times:

When you buy cinnamon, you usually get the cassia cinnamon. It is a cheaper version of the real cinnamon, which would be the Ceylon cinnamon. Cassia cinnamon is a little more bitter and it is cheaper than Ceylon cinnamon. But it also contains coumarin (cumarin).
Coumarin, if overdosed, can damage your liver and I, unfortunately, had that happen in my family. My Mother in Law wanted to use the health benefits of cinnamon but didn’t know the difference and had too much coumarin. Her liver got damaged and she died two years later. My recommendation is: Whenever you need to use cinnamon in a larger amount in a recipe, use the Ceylon cinnamon, which is usually not available at the grocery but can be ordered easily.

Learn more about the concerning side effects of cassia cinnamon here: https://www.healthline.com/nutrition/side-effects-of-cinnamon 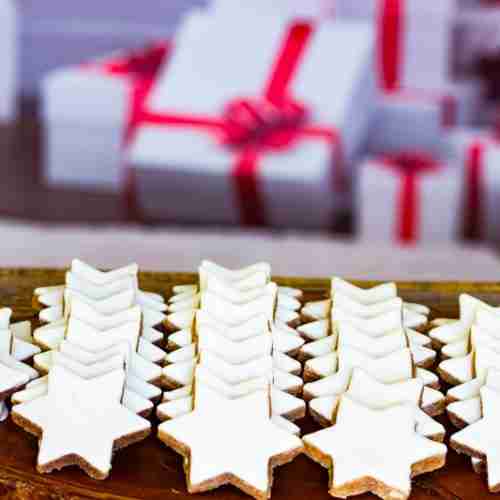 Keyword Christmas, cookies
Tried this recipe?Let us know how it was!