Oktoberfest wouldn’t be the same without a delicious pork hock, crispy and juicy and with some dumplings and sauerkraut on the side. Pure bliss!

I’ve always thought that it is very difficult to make pork hock and really get it crispy but it turned out to be quite easy once you know how to achieve it. So, the cooking basically happens in two steps: You first boil the hock and then later put it in the oven – that’s all! OK, like always, the details are the design, so there is a little more to it like veggies, salt etc.

What Part of Pork?

In Germany, we are using the part of the pig’s leg that is below the shoulder but above the feet. Here in Texas, I only find pork knuckles in a cooked and smoked version and that’s why I had to settle for a pork shoulder which is called a “pork butt” here, for whatever reason. That part is closer to the shoulder and therefore larger than what we use in Germany. So, while in Germany one person gets one hock, here the size is more suitable for two persons, I think.

Usually, you’ll get this served with potato dumplings and sauerkraut … and a large beer! But serving it with other sides, is OK, too. You could serve it with dumplings from bread and red cabbage, just to give you an example. A potato salad or a Cabbage Salad would also be great side dishes! As you can see, there are quite a few sides that are great with pork hock.

Getting the crust crispy and crunchy is the goal, while at the same time making sure the meat stays juicy. The latter is achieved by cooking the meat in water before putting it in the oven.

Part of the crispy crust making is, cutting the skin into squares. This will make sure it separets nicely and also will help to cut the meat for serving. Adding some salt to the skin of the pork can also aid in getting the crust. Most important is though, the oven. At the end of the time in the oven, I turn on the broil. Make sure you stay at the oven and monitor this process, so it won’t burn.

In my video, I was a little too worried that it might burn while I set up the camera for the next scene, so I have the crust only popped at some areas. If you don’t have a broil function or want to have a little more control over that process, you can use a kitchen torch and use this for popping the skin. 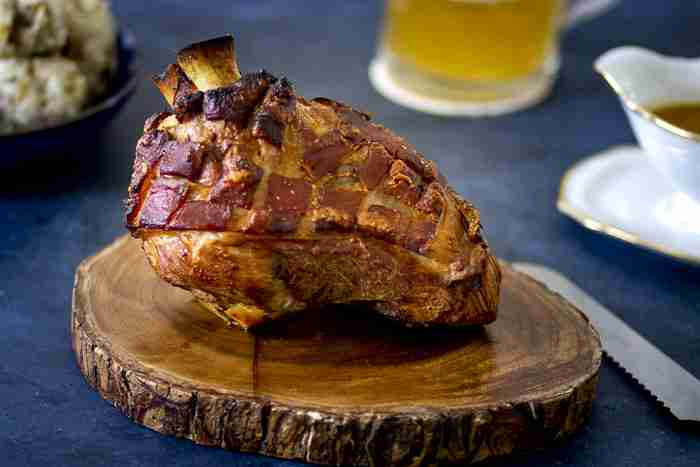