Using mayonnaise for potato salad is common but often it leads to a sticky, heavy texture of the salad and a very heavy feeling in the stomach. What if I tell you that with a little trick, you can have a juicy potato salad that has a much nicer texture and feels lighter? No, I’m not switching the mayonnaise for yogurt or sour cream – although I could and that tastes great, too. The secret is the broth! Soaking the boiled and sliced potatoes in a hot broth before mixing with the mayonnaise makes all the difference. It prevents the potatoes from soaking the liquid from the mayonnaise and gives the potato slices a nice taste. Keeping a little bit of the broth in the salad makes it even juicier. So, yes, that’s my little hack.

In Germany, we use “festkochende” potatoes – which means “firm boiling”. Here it seems that the word for it is “waxy“. Depending on the region where you live (considering readers from the UK, Australia, New Zealand …) these potatoes have different names than those here in the US or in Germany. Chose the potatoes that are called waxy in your area and use them as the ingredient for your potato salad. BUT here is another little trick: Boil one or two potatoes that are high in starch, those you’d usually have for mashed potatoes. Add them to the salad and they might fall apart but their starch will give the salad a nice, creamy texture.

Potato Salad tastes the best after a day in the fridge. If you don’t have that much time, give it at least two hours. For serving, it will taste best slightly chilled but not as cold as fridge temperature. So give it a little time to adjust its temperature to the room. On hot summer days, be aware of the possibility that the salad goes bad it it gets too warm or is out for too long.

Typically, Germans have it as a side for sausages, meatballs (Frikadellen), fried fish, or schnitzel. It is also a very common salad at parties and someone will always volunteer to bring a large bowl of it. Going on a road trip, there is often a cooler in the car with a container of “Kartoffelsalat” for a picnic at a resting area. Some families eat potato salad on Christmas Eve, so the family doesn’t spend too much time in the kitchen – remember, gifts are getting unwrapped on Christmas Eve in Germany.

Besides potatoes and mayo, there can a lot of different ingredients that go into the salad. It – like so often – depends on the region but also on the personal taste. In the North, apple slices are common while in other areas it might be some radish. Eggs, pickles, and onions are used quite universally though. I like to have English cucumbers and tomato wedges in my salad to give it a fresh, summer-like taste.
Depending on what I am pairing the salad with, I might add some Wurst (sausage) slices, you could use Franks for that. But I don’t add this if the salad is a side for a meat dish. 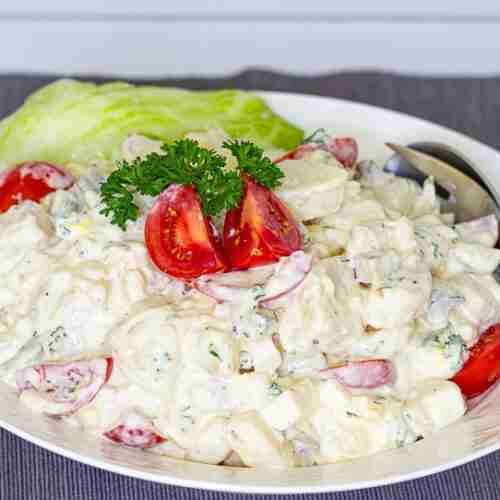 Chose from these additional Ingredient Options

Keyword baking, Christmas, egg salad, glutenfree, made from potatoes
Tried this recipe?Let us know how it was!