Labskaus is a typical Northern dish made from potatoes, beef and beets, accompanied by a herring, fried egg, and some pickles. It’s a sailors eat and you’ll very likely find it on traditional menus in Hamburg restaurants.

Labskaus is maybe not for everyone. The redish/pink color might be weird for some and due to the pickles it can taste a little sour. But you can easily change this by leaving the pickles and pickle water out. Labskaus is definitely great on a cold day and very easy to make. Especially in times like the Corona pandemic, when we don’t want to go to by fresh ingredients every day, this is great to make out of the pantry. So turn your kitchen into a caboose and cook as sailors would out in the open sea.

How to cook Labskaus Video

As mentioned before, this used to be sailors food. It was originally made with a double baked bread instead of potatoes though. The meal resembled the typical ingredients on a sailing ship. Since most sailors had lost their teeth from scurvy, the ship’s cook would mash everything for them. Also, it was easy to hide ingredients that had gone bad in the mush and still feed them to the sailors.
Without knowing why, but seeing the results, they figured that beets and pickles can prevent scurvy so they added this to the mush, too. Today we know that beets and pickles contain large amounts of vitamin C. A lack of vitamin C causes scurvy.

Like many northern dishes, Labskaus is widespread through several countries like Danmark and Norway. There also seems to be a similar variation of this in England. Every country and region has its own variation of the meal, even within Germany recipes differ.

A lot of the spread of Northern recipes can be accounted to the sea trade that brought them to adjacent countries. Picking up pieces of all the different languages, names for dishes changed or were adapted into the own language but with an accent. There are at least three assumptions where the word Labskaus originated. It is impossible to trace back where this recipe really comes from. 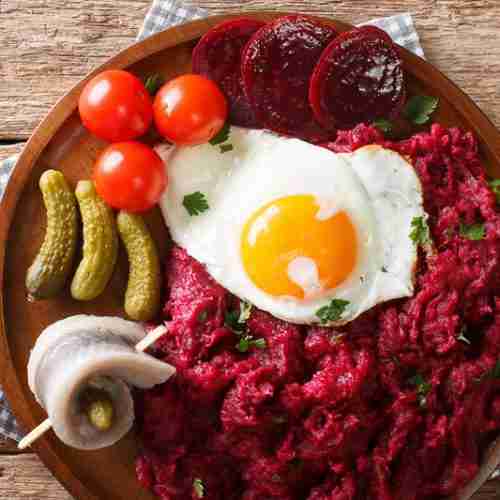 Keyword fish, glutenfree, made from potatoes, meat
Tried this recipe?Let us know how it was!