How to make Potato Dumplings

Home » How to make Potato Dumplings

Potato dumplings are a very easy side but give each meal a feeling of a holiday. This probably just me, association dumplings with Christmas dinners. When potato dumplings are on the table, usually the red cabbage and goose or roast are not too far away!

How to Make Potato Dumplings Video

Different Kinds of These Dumplings

This recipe describes the version with the boiled potatoes and it is quite simple. Actually, there is not much to write about it other than using enough salt. I cannot stress than enough. If you don’t put enough salt into the potato mass, it won’t taste very well. So, taste some of the mass before you shape the dumplings and add more salt if needed.

Filling or no filling?

It is entirely up to you whether you want to put croutons into the center of your dumplings. The benefits – besides the taste – is, that they take some of the moisture from the dough and prevent the dumpling from being too moist and fall apart while cooking.

There is also the possibility to make these dumplings sweet instead of salty. In that case, a small apricot is used as a filling – very delicious, too!

Serve the dumplings fresh if possible. Leftovers can be cut into thick slices and fried in some butter. 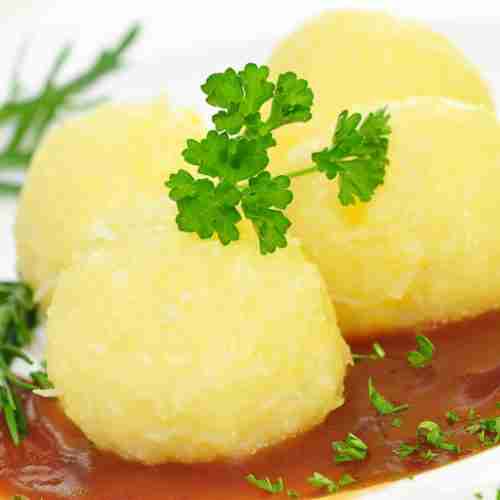 Keyword made from potatoes
Tried this recipe?Let us know how it was!

23 thoughts on “How to make Potato Dumplings”