How to Bake Bread with Yeast Water

Home » How to Bake Bread with Yeast Water

Many have watched my video about how to make yeast water and were asking how to bake a bread with it. So I decided to make a video and show (and for some: prove) you how it’s done.

Baking with yeast water is not much different from baking with sourdough: Both should be made with a pre-dough. Though I wouldn’t rule out that one can use the yeast water directly in the bread recipe, it might take a lot longer for the dough to ferment and rise.

In the pre-dough with the yeast water, the yeast can double, triple, quadruple … over night or several hours during the day. This makes it much more powerful and more active and once mixed with the remaining ingredients, it can thrive better and faster. It still might need a longer period of time to rise the dough compared to what you are used to with store-bought yeast. However, the time is still significantly shorter than a direct mix.

Another reason is, that if your pre-dough fails to create bubbles and rise, you know that your homemade yeast didn’t turn out good and can start over before wasting all the other ingredients and the time for kneading until you learn that this bread will not rise. So, it is also a check on your yeast. If it performs well, then you know you can go ahead and your dough will rise to a nice bread.

In this article’s video, I also show how to feed the yeast water and answer several questions that came up in the comments of the video and the blog post. I hope this will clarify some of the questions and help you, to successfully implement this technique of bread baking.

It might happen that your yeast water let’s your dough rise faster or slower. Every yeast water is different and it might become stronger and more active over time if you use and feed it on a regular basis. If your dough does not rise, even though your pre-dough was very active, something else must have gone wrong.

If Your Dough doesn’t Rise

Let’s not forget that yeast is still a sensitive organism and you can easily kill it with water that is too hot or if it gets into direct contact with salt. So, let’s talk about what’s “lukewarm”. Luke-warm water is used in most yeast recipes. Some yeast recipes call for cold water – those recipes require a very long proofing time and this is mostly used in rolls. So, most of the time you need luke-warm water and the temperature that is associated with that seems to be rather hot on some websites. For that reason I will not give you an exact temperature to measur but instead a temperature that most parents can relate to: a little below baby bath temperature! It should feel warm but just not comfortable warm.

What about salt? Well, there is the saying that salt can kill the yeast and there is something to it but it’s not that bad. I would recommend to just either mix the ingredients and the yeast first and then add the salt a little later or just put the ingredients into your bowl in a way where the salt and the yeast / yeast-water don’t touch each other directly. This said: There is a special baking technique where salt and yeast are mixed with each other before baking … but that’s on a different level and I will get to that another time with store-bought yeast.

I hope you are successful with your yeast-water bread and get a loaf at least as nice as the one I got!

With the pre-dough and the proofing time, the bread isn’t baked that fast. Here are two suggested timelines: 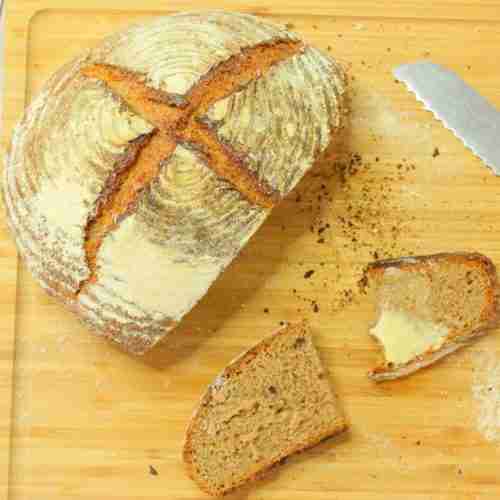 To keep dough from drying

Keyword baking, Bread
Tried this recipe?Let us know how it was!

29 thoughts on “How to Bake Bread with Yeast Water”