Meatloaves are kind of international, I guess, but of course, this German Meatloaf has to have a weird name: Falscher Hase – Fake Rabbit!

I honestly don’t know why it’s called that. I am assuming that the name comes from the shape since it kind of looks a little like a rabbit roast. But it is made with half beef and half pork meat.

The Other German Meatloaf

I mention it in the video but want to also put it down in writing: This is not the only German meatloaf. There are other recipes, too, and since Americans often refer to the Bavarian “Liver Cheese” (Leberkäse) as a German meatloaf, I want to point you to the direction of that recipe: Bavarian Liver Cheese Recipe.

Traditionally, we are using a mix of 50% ground pork and 50% ground beef but that doesn’t mean you can’t make it with just ground beef. It might make things a lot easier for you to know that. However, you can ask your butcher to make you that mix or simply get yourself a meat grinder. I found myself using a meat grinder more often than I ever expected, i.e. for making sausages.

Then, you can also change the spices in the recipe or add spices like paprika. The parsley can be switched with other herbs like chives or Italian herbs.

To change things up even more, replace the boiled eggs with some thick chunks of Feta and use Italian herbs and you have a Greek variation of our recipe – I love that very much!

The bacon in the recipe is optional. If you prefer not to use it, it’s totally fine.

If you choose to wrap your meatloaf in bacon but also use a loaf pan, you would have to place the bacon in the bread pan, first. This will leave the seam on top and might not look as good as the baking sheet version. On that note: My daughter declared that my meat loaf looks like a giant bacon worm. Teens can be so funny! 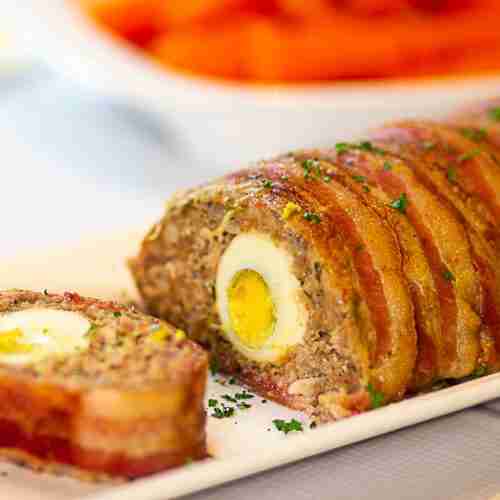 Keyword meat
Tried this recipe?Let us know how it was!