There is not kids party without our German Chocolate Kisses! Whether it’s a birthday, Fastnacht, or a summer party: These sweet treats are a given. They come in different sizes and colors but they all have the wonderful fluffy, airy texture in common.

Get the wafers here: https://amzn.to/2XZlDG5

Growing up in Germany, I’ve never been to a birthday party without chocolate kisses. Kids stuff them into their mouths, leaving some sticky residue around the lips and some chocolate on their fingers. There is always room for a chocolate kiss in the stomach!

But not just at parties, also in our daily lives we eat them: between the halves of a fresh German roll, in a torte (cake) and even in desserts!

There is one brand in particular that has conditioned a generation to their product with advertisement. The brand is called Dickmann’s and the ad was, to let people eat one of the chocolate kisses and afterward with a full mouth say nothing else than “Mann sind die Dickmann” (“man, they are Dickmann!”). Nobody can eat a chocolare kiss without at least thinking (and often saying) this sentence!
They offer their choco kisses in two sizes, the regular size and the mini Dickmann’s which fit into the mouth in just one bite. Also, there is dark chocolate, milk chocolate and white chocolate to choose from.
Their competitor Grabow offers chocolate kisses with some coconut sprinkles on the chocolate, which is delicious, too. Some independent places, that sell them fresh in their shop, add different flavors and toppings like sprinkles etc..

How I Eat Them

It’s hard to tell if the cream or the waffle are the best part, I think the combination of both, the sweet filling and the rather neutral waffle make it perfect.

Why would you make this?

If you haven’t had this in your childhood and are not from Germany, you might ask yourself if it’s worth making this. Let me just tell you this: The German expats facebook groups frequently have threads where people try to figure out how to get some packages of this treat on a plane and safe to their destination in the US. It is impossible though, just so you know. They are too delicate!
There are some online shops here in the US where you can order them. They will most likely have a broken chocolate cover and due to a long journey, the cream will be no longer fluffy but gooey instead. Chocolate kisses must be fresh!

I am actually a little embarrassed because I made a mistake in the video: I forgot to soak and delude the gelatin! Usually, I avoid the use of gelatin and I haven’t used it in probably more than a year. It’s an old habit from the time in Germany when the mad cow disease scared us quite a bit. We went mostly vegan during that time for years and then later only bought organic meat products from a farm close to our neighborhood. So, I am not a routine gelatin user and here you have the proof. I was actually wondering, why the filling of the chocolate kisses fell apart after a day and then I realized my mistake. Don’t repeat it!

The name of the chocolate kisses has changed over time. They used to have a racist name in my childhood and then people decided to give them a new, better name “Schokokuss” or “Schaumkuss”. Some people are having a hard time to get used to change but I ask everyone politely not to use the previous name in comments. Thank you.

As mentioned before: Eat them fresh, that’s when they are best. Don’t store them longer than two days since this is made from raw egg whites after all.
Make sure that you use pasteurized eggs to avoid salmonella. Read more about that HERE. 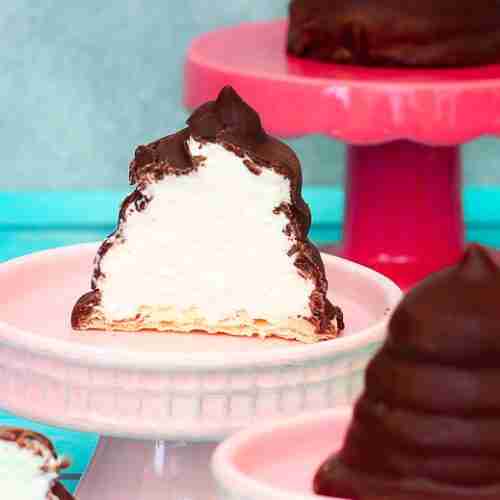