There is a large variety of German Apple Cakes. This is the recipe for “Altdeutscher Bratapfel Kuchen” which can be translated to “Old German Baked Apple Cake”.

This Apple cake is a very rich cake since it has vanilla pudding that is cooked with heavy cream. I love to eat this cake slightly warm with some vanilla ice and a bit of freshly whipped cream on top. Not exactly made for weight loss but totally worth the calories!

Apple for the Apple Cake

If you bake this apple cake, try to get apples that are slightly sour. It gives the cake a perfect contrast to the sweet vanilla pudding. Baked Apple Cake is usually made with smaller apples than in my video but as you probably know: Everything is bigger in Texas! I had to partially cut some of the bottoms off and since they were still large, the cooking time needed to be longer than usual.

You’ll want the apples to be somewhat soft at the end of the baking.

For the raisins, I used some rum from my rum pot, since I was out of rum and still had a leftover from that rum pot rum. If you don’t want to soak your raisins in alcohol, substitute it with apple juice.
Also, instead of putting the raisins just into the core of the apples, you could as well distribute them all over the cake. I choose to just put them into the core, so my picky husband can easily pull them out. 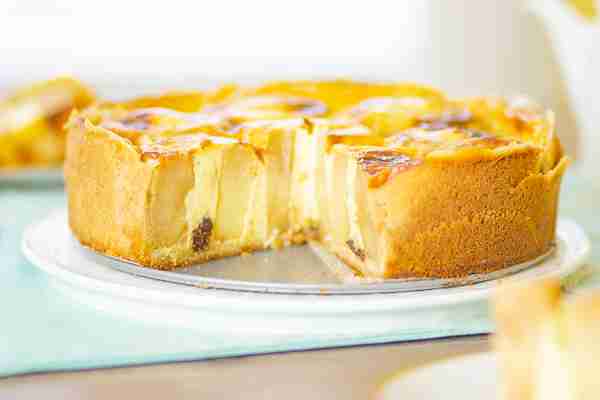