There was a request for Bratkartoffeln which are fried potatoes. I know how to make them very well because I had it at least two to three times a week while growing up. A variation of these fried potatoes is the Bauernfrühstück, which I can translate to farmer’s breakfast.

These two meals were often a leftover meals or meant to stretch the budget since potatoes were cheap and filling. Many times my mom would boil more potatoes than needed just to make Bratkartoffeln the next day or to serve my stepfather a farmer’s breakfast.

We had the fried potatoes sometimes as a side dish, sometimes as a lone meal with ketchup. If we made a farmer’s breakfast (mostly served for dinner though), we got the eggs from a neighbor who had chickens. The area where we lived is called Schleswig Holstein and is the most northern state of Germany. The name Farmer’s Breakfast is no coincident: The weather there is often harsh and the area is mostly agricultural. Ther farmers and farmhands usually have a big warm breakfast and then just take some sandwiches out for lunch while working in the fields.

One of my first cooking experiences

Since making fried potatoes is so easy, it was one of the first recipes I learned. But like so often, the details are the design and it took me years to understand how to achieve real crisp potatoes. My mom’s fried potatoes were always soaked in oil and not crisp at all. By just copying her cooking I of cause got the same result. But after some time I learned to use less fat, which made things much better – especially the taste. Then I realized that putting all potato slices randomly into the pan wouldn’t result in crisp Bratkartoffeln. I started to lay them in one layer if possible, two layers at the most. If I had to make it for more people, I would make several batches and keep them warm in the oven.

Herbs in the Fried Potatoes

In the video, you can see me using parsley adding it either to the fried potatoes or sprinkle it on top of the farmer’s breakfast. As often as parsley, people also use chives for a little more spice. Sometimes my mom would also fry some tomato wedges and add them to the farmer’s breakfast before serving it – very delicious!

So what I am saying is, there is no law that forbids you to try some new varieties. Play a little bit around with it, add veggies, spices, herbs that you like. Potatoes are so neutral in their taste, they go with a lot of things!

A special variation are fried potatoes as a side dish for our German Kale dish that we enjoy after the first frost. There they are caramelized or sprinkled with sugar and it tastes amazing with the savory kale and sausage! 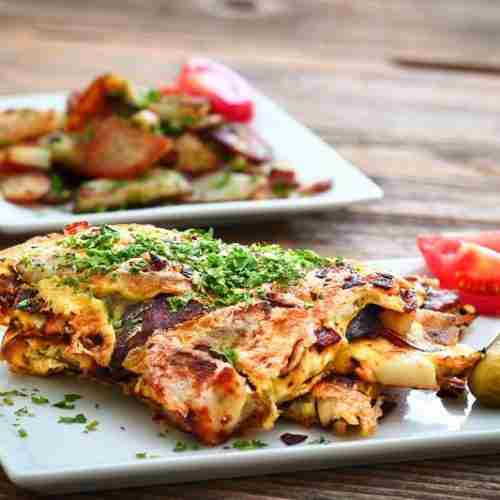