How to bake Franzbrötchen – beloved Cinnamon Pastry from Hamburg

Home » How to bake Franzbrötchen – beloved Cinnamon Pastry from Hamburg

Franzbrötchen are a beloved traditional specialty from Hamburg and the original is only available in Hamburg. You will not find this in bakeries in other parts of Germany though a few cities are recently trying to copy them – never as good as the original!

This delicious cinnamon pastry is probably a relative of Americas Cinnamon Rolls but the Franzbrötchen is softer and moister. The dough makes all the difference: Cinnamon Rolls are made with a simple yeast dough while Franzbrötchen requires a sweet puff pastry dough with vanilla in it. Or in short: If you make a Franzbrötchen, you reach a whole new level of artisan baked pastry! Congratulations!!!

How to Make Franzbrötchen Video

The video shows all the steps to make this wonderful Cinnamon Pastry from Hamburg.

While the assumption that someone with the name “Franz” has invented these delicious, sweet rolls seems obvious, it’s incorrect. Franzbrötchen are a result of the occupation of Hamburg by the French army back in the days when Napoleon invaded and conquered most of Europe. A baker in Hamburg-Altona (that’s actually where my husband and our son were born) invented these rolls for the French soldiers, who wanted to have food similar to what they had in France. Another fun fact here: One of my ancestors was such French soldier, fell in love with a girl from Hamburg, married her, and stayed for good.

The word “Franz” is short for “Franzosen”, which means “French”.
The word “brötchen” is German for “rolls”.
So they are basically “French Rolls” but I can’t call them that because french rolls are something else in America.

I tried several recipes and most of them failed to be as soft and tasty as the original Franzbrötchen. Some were brittle, others even a little hard or dry and eventually the key to the right taste and consistency was time. You can’t bake these rolls in a day or two hours. They are a piece of art and need a lot of resting time and two pre-doughs. Plan two days to make this recipe and you will be rewarded with the best-tasting cinnamon pastry you’ve ever had!

One of the recipes I tried was from a book that I own. It’s about rolls and breads from Germany and also the source of my biggest baking disappointments. But I still wanted to try the Franzbrötchen recipe in it and though it came somewhat close to the right taste, the consistency was to dry and crisp. I kept looking for and trying out other recipes and watching videos. In the end, I put together what I believed to be the best techniques and the best recipe in my way of baking them. The most part of the recipe though comes from s-kueche.com and I don’t want to leave it unmentioned, the recipe deserves credit. I changed it a little though.

Puff Pastry – Storebought or from Scratch?

Making puff pastry might be scary at the beginning and it is very tempting to just buy it frozen and ready to use. If that’s the way you want to do it, I won’t judge you. If you are not from Hamburg, you will most likely still be happy with it since you’ve probably never had the original. But for those here who are adventurous or homesick natives from Hamburg, you should definitely try my “made from scratch puff pastry for Franzbrötchen” since it is 1. a little sweet, 2. with vanilla and 3. free of weird chemicals and ingredients that one can barely pronounce.

Puff Pastry is made from layers of dough and butter. The way it is made is wrapping a large, thin slice of butter into a dough that contains a little yeast. Then you fold this wrapped butter several times, creating more layers the more you fold it. In this recipe, you want to have 6 layers of butter in the dough, so you first fold it in halves, which creates 2 layers of butter and then fold it in thirds which then results in 6 layers. If this is somewhat unclear, please watch the video, it will become clear to you when you see it.

You want to keep your ingredients and dough cold until before baking: The yeast in the main dough should not become active before the rolls are shaped! The only exemption is the butter that you mix into the dough, it needs to be soft (not liquid) to mix in well.

Below the ingredient list, you can switch from metric to US customary units. The best outcome is always with metric units since I often have to round up or down the units for US customary measurements which makes them even less precise.

Some of the videos I watched, showed some “behind the scenes” of Hamburg’s bakeries and how they are making the Franzbrötchen – without spilling their recipe though. Most bakeries brush the dough with water, before putting the cinnamon-sugar mix on top. Some brushed it with melted butter and in one video they mixed the sugar-cinnamon mix with soft butter and then put it onto the dough all together. In the video I do the second technique: Brush with melted butter, then sprinkle the mix on top. But also in the video, you can see that some of the cinnamon-mix comes out of the rolls when I cut and shape the rolls. So, next time I will use the third method and mix soft butter with the sugar and cinnamon and see how that goes.

Some bakeries brush the Franzbrötchen with sugary water after baking. I oppose this practice since it makes them really sticky and way too sweet.

Since making them is a little time consuming, it makes sense to make a lot of Franzbrötchen at once and then freeze most of them. After thawing, they will taste just the same if they were fresh. Warming them up in the pre-heated oven for a few minutes, even gives them the “freshly from the oven” vibe and nobody would ever guess that they have ever been in the freezer!

If you still want your Franzbrötchen fresh from the oven but want to be able to prepare them ahead: Prepare the puff pastry as described in this recipe to where the puff pastry has to rest and instead freeze it. Thaw the pastry dough when you want to make them, and continue from the step with the filling. 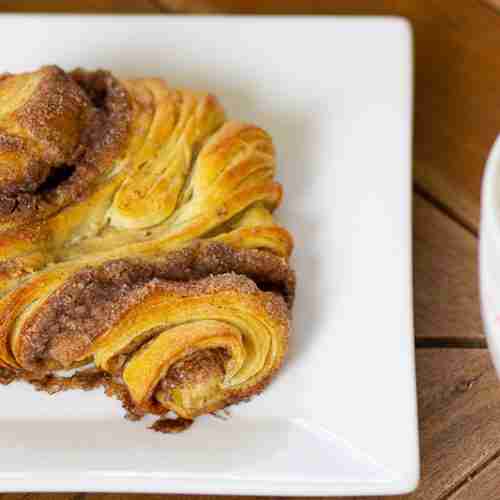 To make the Main Dough

To make the dough into Puff Pastry

Keyword baking, Christmas, sweet, vegetarian
Tried this recipe?Let us know how it was!