Elderberry soup is packed with a lot of vitamins and for me also with lots of memories. My grandmother cooked this soup for us children in fall and we all had a purple mouth after eating it, laughing about each others dyed tongues and lips. Another memory involves my then boyfriend Stephan. We put a huge cooking pot on the tank of his motorcycle and drove out to the country. There we picked as many elderberries as we could fit into that pot and drove back home to Hamburg. Later we made juice from the elderberries and cooked soup and delicious jam.

The German word for Elderberry is Fliederbeeren or also (in other regions of Germany) Holunderbeeren. This recipe for Elderberry Soup is from the North of Germany, an area which is called Schleswig-Holstein. It is north of Hamburg and goes all the way up to the border of Denmark. This is where I grew up for the most part of my childhood, near a town called “Kaltenkirchen” which could be translated to “cold churches” – totally true! 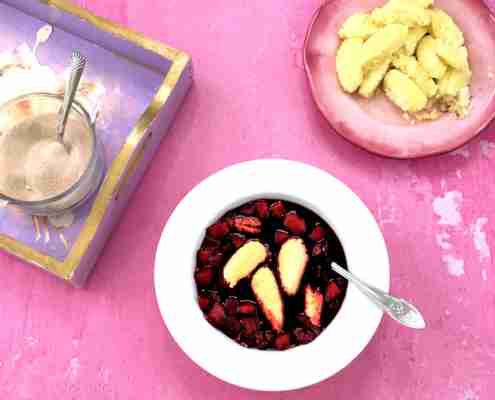 … and since German churches are so cold, we need to protect our health … JUST KIDDING! But Elderberry really have an amazing health benefit and I highly suggest having a bottle of this juice in the pantry during flue season. I copied this list of benefits from the website of biotta’s description of their elderberry juice: 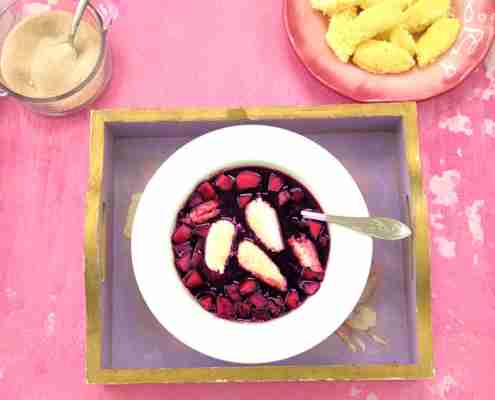 Finding Elderberry juice here was not so easy. I couldn’t find it at any store and even amazon didn’t carry what I was looking for. All I found was elderflower juice – not the same thing! I gave up on it until recently. I started another internet search and eventually had success. What I didn’t think of when cooking the soup in the video, was, that store bought juices often contain added sugar. Since I used to make my elderberry juice from scratch, my amount of sugar added to the already sweet juice. So be aware that your soup might already taste sweet before you add the sugar. I highly suggest that you try the soup before you add the sugar and decide for yourself how much more sweetness the soup needs.

The soup traditionally comes with grit dumplings and in my childhood I was always trying to get as many of these as I could. And if my grandmother had any leftover of them, she would later fry them in some butter until they are golden-browned and serve them with cinnamon and sugar – soooo gooood! 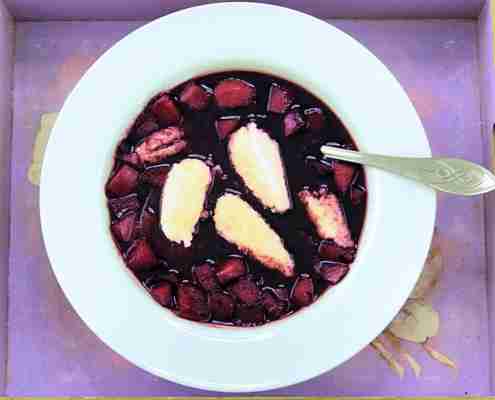 Is this a dessert?

Did I mention that this is more of a kids dish and usually served for lunch? My kids decided it’s more a dessert though – obviously they are living in the US for too long already to understand that sweet dishes don’t necessarily need to be a dessert. It’s a German thing! 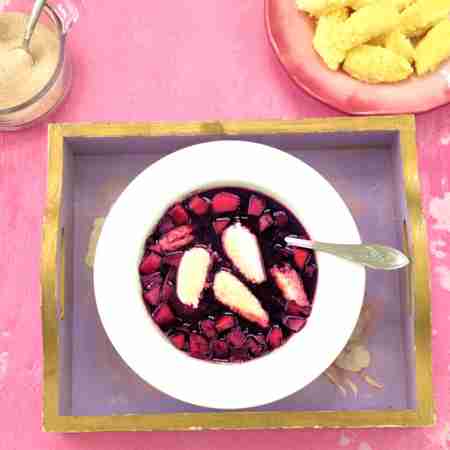 For the Grit Dumplings