Weißwurst (notice the letter “ß”, called “eszet” and spoken with a sharp “s” sound) is a Bavarian sausage and there is quite a bit of weird traditions about it. If you don’t want to upset Bavarians, you better know how to eat it right … and when to eat it! Watch an learn … 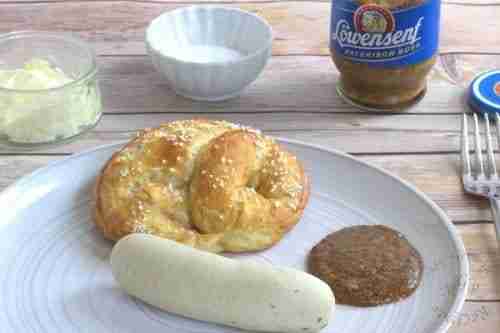 I do only have little memories of my grandfather. We lived far from my grandparents and I barely got to see them. But when my sister and I visited, he would tell us the whole history of Bavaria and Austria starting somewhere in medieval times and mentioning every prince, princess, king … with birth date, when he reigned  and died or who got married to whom and so on. I’ve never been good with names … or numbers … so it just passed my brain and didn’t leave any impression. That’s too bad but I was a kid and I won’t blame myself for being more interested in other things at the age of ten.

But the Weißwurst tradition totally soaked in and I can still remember him, explaining and showing how it’s done. 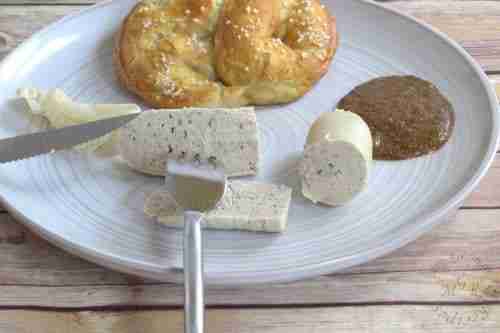 First of all it has always been a rule that a Weißwurst can not be eaten after the rooster had crowed for noon! After that it will not be fresh and should not be eaten.
Well, meanwhile there is this invention, called “fridge” and I think this rule has expired, but Bavarian’s are stubborn people so they will not change that rule.
I wouldn’t have a chance to eat a Weißwurst here in Texas with this rule, so: Yes I broke it! I bought a Weißwurst at Central Market in Houston that was “god knows how old” and wrapped in plastic and I ate it for lunch an hour after noon! I’m still alive, nothing happened other than that I enjoyed it very much! My grandfather just turned in his grave …

Second: You are not allowed to touch that Wurst with your hands to remove the casing! And also you are supposed to cut it open in a specific way!!! Don’t worry, I will explain and show you how, so you will not embarrass yourself the next time you visit Munich or attend an Oktoberfest.

Peel a Weißwurst step by step:

I showed and explained it to my kids just recently and they had no problem doing this.
Unfortunately my husband had been in a conference call and joined our lunch a little later. He has not Bavarian relatives and I forgot that he would need to learn it, too. He had a hard time to eat his Weißwurst without the instruction!

Have you noticed the mustard on the plate? It is sweet Bavarian mustard. You can get it a Aldi here in the US! It is really sweet and a perfect match with the Weißwurst.

One more thing: You might see a Bavarian holding the wurst in his hands and soaking on it. That is an other way to eat Weißwurst but I don’t support it because in my opinion it is uncivilized ;-)