Skiing in the Alpes comes with eating Germknödel aka Dampfnundeln! If you’ve been there up on the mountain for lunch, this food is what gives you all the energy back that the cold weather sucked out of your body. Even if you are not skiing but maybe shoveling snow or just trying to make it to the mailbox, have in mind that you will always be able to reward yourself with Dampfnudeln!

I mostly lived in the North of Germany, far from the Alpes, so except for vacations I didn’t get Dampfnudeln and I had no idea how to make them myself. But I loved these sweet dumplings with the delicious plum spread filling (recipe for Plum Spread here) and wanted to learn it.
Oh, at first I was so scared to make these. My friend Sybille from Stuttgart showed me how to make Dampfnudeln when we visited her and that’s when I realized that it is really simple. My family loves them and except for the fact that you cannot make them last minute right before a meal, they are a relaxed meal.

As mentioned before, Dampfnudeln are also called “Germknödel” and the word “Germ” stands for “yeast” in Austria. The yeast is why one cannot make them twenty minutes before lunchtime – this food needs to rest and grow like bread dough. And that’s what it basically is. It’s a sweet yeast dough and one can either cook them over steam – then they are called Germknödel – or in a mix of cream, milk, butter, and sugar – then they are called Dampfnudeln.

Dampfnudeln and Germknödel are traditionally served with a warm vanilla sauce and some poppy seeds on top.

The difference is in the cooking method: Dampfnudeln are cooked in a mix of mik & cream while Germknödel are cooked over steam or in boiling water. If you make Germknödel, add some salt to the water. But don’t overdo it, your Germknödel shouldn’t taste salty.

Some people make their sweet yeast dumplings in the oven (called “Rohrnudeln”). I tried that but I think the dough dries out too much in the oven. In my opinion, it tastes better to cook the dumplings.

Now learn the really simple method to make this sweet treat of a delicious meal and don’t even think about just serving it for dessert – they really make you full … very full! 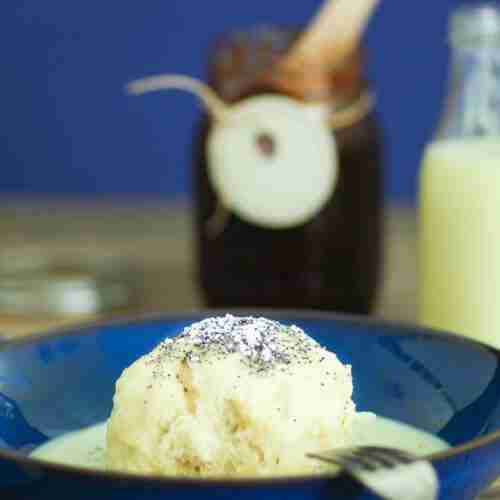 How I prefer my Dampfnudeln:

Personally I like to put some cinnamon-sugar mix onto my Dampfnudeln / Germknödel!
Tried this recipe?Let us know how it was!
Summary