Crunchy, crispy pork roast the way it’s done in Bavaria and as the cherry on top: Beer Sauce! Feels like Oktoberfest on the tongue. You can’t ask for more, right?

Pork Roast With Crackle is one of the most delicious things that can end up on your plate. Saying this, I have to tell you too, that I am a part-time vegetarian. I don’t eat a lot of meat. However, when I do, it has to be worth it and the Bavarian Pork Roast is absolutely worthy! It has so much flavor and the crackled skin is a dream come true – but don’t pour the sauce on top of it! Just put the sauce on the plate before the slice of heaven so the crisp pork skin stays crisp!

The Meat for the Roast

If you can get your hands on some pork belly, that would be best! There should be a thick layer of skin and fat on the meat. In Germany, there is often a large stamp from food control on that skin, which needs to be cut out. I, again, had some trouble finding such a nice piece of meat where I live. I asked the butcher at our grocery for pork with skin and fat on it and he just looked at me in horror and said: “Mam, we only have the regular.” Which is fat-trimmed meat? Excuse me but I’m in Texas where every food drips from oil and fat! But when I want to buy meat, they suddenly pretend that Texans are on a Californian diet, it’s ridiculous! I eventually found a pork shoulder with skin at a different grocery. It was a compromise.

If you have trouble to find this kind of pork, here is my advice: If you have a Korean grocery (here it is “H-Mart”) in your area, they will have pork belly! I’m not sure about Japanese and Chinese groceries but it’s worth a try.

A good slice of meat can get even better with a delicious sauce! Stay away from those instant gravy it has no taste and is watery. The beer sauce is very easy to make with the roast and tastes wonderful.

For my video I decided to shop local and bought a Texan beer instead of an import from Germany. The sauce still turned out so delicious as if I had used a Bavarian beer. Talking about beer: In 12 years of Texas, I have never tried American beer! It’s the same as with meat: I don’t drink alcohol often but when I do it has to be worth it.

You can see me trying that Texan beer for the first time, watch the video to see my reaction.

Vegetables for the Sauce (Gravy)

I used carrots, celery root, and onion, some people also add leek, I don’t. Make sure the veggies are diced to about the same size. Adding garlic is a personal preference of mine, if you don’t like it, leave it out. Like always, the garlic is sauteed shortly before the liquids are added. If you fry garlic too long, it turns bitter.

This method has never failed me! I first cook the skin in some water, which makes it easier to cut but also makes it moist or juicy so it won’t burn or dry before it pops later in the oven.

Next, I roast the meat at a very low temperature of 80°C / 175°F until the center of the meat has reached almost 60°C / 140°F. The skin is not crisp by then but also hasn’t dried out. Removing the vegetable and liquid, I then put the roast back into the oven at 240°C / 465°F for about 20 minutes. I avoid the convection function for this and just use the top-bottom heat. I am not using the broil. It might become a little smoky in the oven when fat hits the oven walls, be aware of that, ventilate the kitchen!

Sometimes, especially with larger roasts, the skin doesn’t pop everywhere. If it bothers you, use one of those little kitchen torches and pop those rectangles with the flame.

When you cut the pork skin after cooking in the water, make sure you cut parallel to where you want to cut the slices later. Then cut 90° to that, creating squares. The cuts should have the width of the slices you plan to cut once it’s finished. This way you don’t have to cut through the crispy pork skin, which might damage it, make it break apart, etc.
Simply said: You just cut in the gaps of the skin.

Best Side Dishes for this Recipe

I served this roast with bread dumplings, green beans and carrots. I also recommend these side dishes: 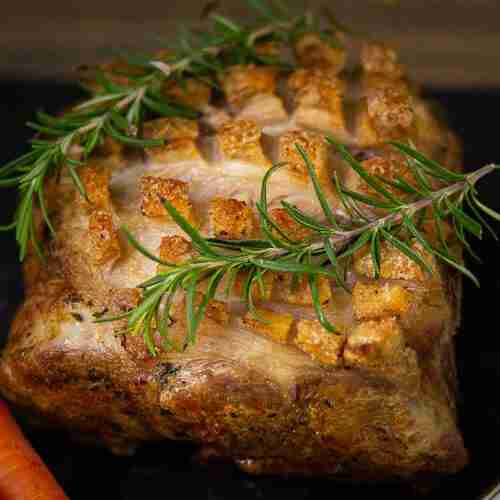 For the Roast & Sauce

Rub for the Roast 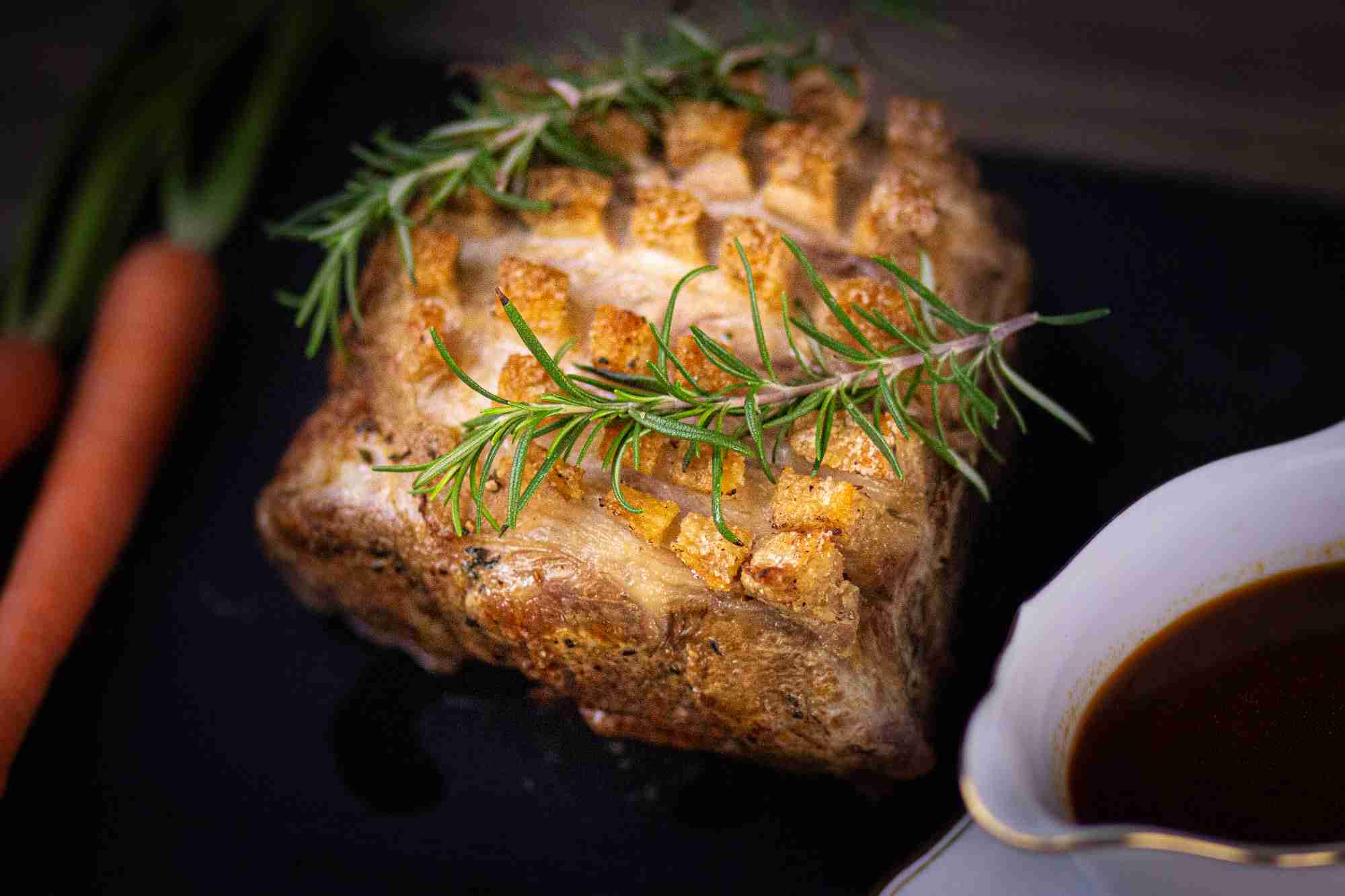