I was a little hesitant if I should do this video or not, since Chicken Pot Pie isn’t a totally new idea the Americans and probably also British and Australians. But this recipe is something I cook quite often and it’s a great freezer meal, too.

I looked up some of the English language recipes and there are a lot of similarities between our recipes. But taking a closer look they are still very different though and small differences can have a big impact on the taste!

There is first of all the fact that we put asparagus into our Chicken Pot Pie while it seems that English / American recipes call for onions instead. That alone gives our recipes a very different taste. So if you are up for a twist on this recipe, just follow my instructions.

What kind of chicken meat?

Here in Texas, I can buy cooked or shredded chicken ready to use at the grocery. They also sell roasted chicken. This all would work for this recipe. I personally have some trust issues with shredded meat … who knows what quality this is? So my preferred chicken is buying chicken breasts, organic if possible, no antibiotics – you’ll taste the difference! I cut and cook the chicken breasts in chicken broth which I can later add to the sauce. Since the chicken broth has actually cooked some chicken, it also has a richer flavor than if I’d just add a store-bought broth package.

We usually don’t make pies in Germany (which is a shame because I love pies!) and most of the time we have our chicken pot with rice or potatoes. But on special occasions, we have it with these delicious, crisp puff pastry shells. One can order them at the bakery and they make them fresh. We just need to reheat them in the oven and then fill them with our chicken ragout. We call that “Ragout Fin” then. We used to have that for Christmas when my mother in law was still alive. She had some nutrition issues and this is what she could still eat without consequences.

Can you imagine how happy I was to learn that I can get these shells here, too? They are in the freezer section with the puff pastry.

We had too much Chicken Pot Pie

When we bought our house, I knew the first thing we had to do was remodeling the kitchen. That entire thing had to go! I had great ideas for the layout (I learned some kitchen planning at school) and it was clear to me that this would take a while. So while I was packing for the move to the new house, I was simultaneously cooking chicken ragout en mass, froze it and brought it to the new house which conveniently came with a freezer in the utility room. So, to make a long story short: I didn’t have a kitchen for about two months and we had quite a lot of that chicken pot pie reheated in the microwave which was placed on top of the washing machine. As a result, nobody wanted to eat that anymore for about a year after the kitchen was finished. But we all recovered! … and this kitchen was absolutely worth it! 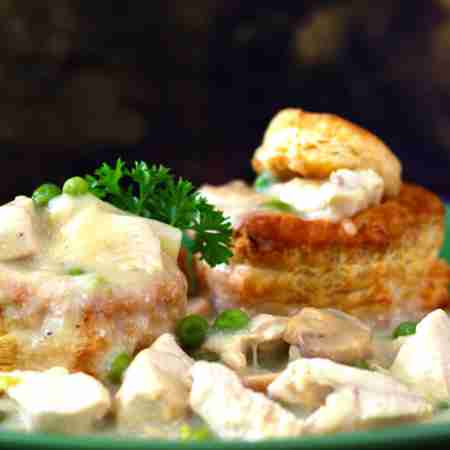 
Lots of different items in my Fan Shop!
Check it out ...