It seems that something similar is sold in the US as Beignets. They are basically like doughnuts but with jam in the center instead of having a hole in the center.

How to make Berliner Krapfen Video

They are very similar. It’s just that Americans steal the center and then sell that separately.
Maybe cutting the hole in the center had a practical purpose? If your oil is too hot, the Berliner will be nice and brown on the outside pretty fast while the center is still raw dough. Maybe American bakers tried to avoid that by making the dough into a ring? Quite possible.

A bad Joke with Berliner Krapfen

While you can buy Berliner Krapfen all year, they have a definite place at two special occasions in Germany: New Years Eve and Carnival (German Karneval … like Mardi Gras). And people try to be specially funny (I’d rather call it silly) at that time and claim that there is one of the Berliner Krapfen filled with mustard instead of jam. Although I have heard this on many parties, I have never heard that anybody really had one with mustard in it.

As mentioned above, you can buy Krapfen all year but they are a MUST at New Years Eve. We eat them after midnight, so the new year starts sweet. That’s how we do it in North Germany. There might be different traditions in other parts of Germany that I don’t know about.

The other time is, when we have our Carnival season, usually sometime between late January and early March. It’s the time when people want to indulge before catholic lent starts. This is specially celebrated in the region around Frankfurt, Düsseldorf, Köln (Cologne) … we call that area “Ruhrpott”. The people there are quite different from the people in the rest of Germany.

Most of the time, Berliners are filled with jam. Mostly cherry or strawberry jam but sometimes also peach jam. But you can also get them with a filling of vanilla pudding or newer days even with Nutella.

In the video I cover the Berliner with confectioners sugar. That is one way to do it, the other way is to use a royal icing made from confectioners sugar and water. Often, that glazing also gets some sprinkles on top. Some also make a chocolate glaze. I like the powdered sugar version, it reminds me of snow.

Freeze them for Later!

If you want to make them ahead or can’t eat them all – don’t worry! They freeze really well! Once thawed, just warm them up in the oven for a few minutes and then enjoy them as if they were fresh. I already made our New Years Eve Berliner. Looking forward to eating them, is basically the only thing that keeps me awake until after midnight. 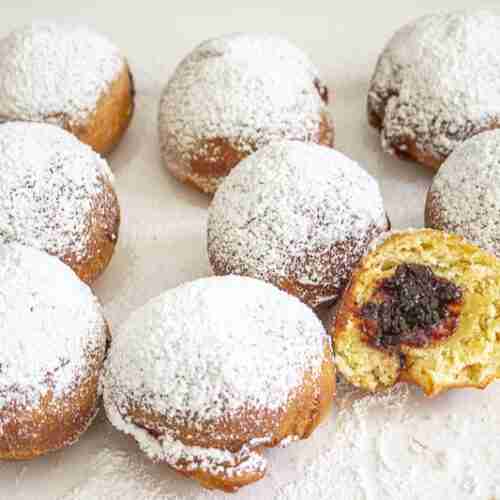 Keyword baking, Schmalzgebäck, sweet, vegetarian
Tried this recipe?Let us know how it was!