Wurst Salad is very similar to the Fleisch Salad that I posted a while ago. At least, some of the ingredients are similar but it is made with a vinaigrette and enjoyed as a side dish, not on a slice of bread.

is very refreshing and perfect on a hot summer day to have a light meal or snack with a glass of beer or so. In my video, I explain the difference between the Bavarian and the Swiss Wurst Salad, which is basically just adding some Emmentaler cheese for the Swiss version.

Adding some red radish gives this rather pale salad some color but in Germany, we also have a different radish, which is white and except for the color looks like a huge carrot. That kind of radish is also enjoyed my just cutting thin slices, put some salt on a slide and just eat it like that. Very common at a Biergarten as a snack but it can also be added to this Wurst Salad.

Add more Color to the Salad

This salad also gets more color if you use some red onion with the yellow onion. Red onions are a little sweeter than their yellow sisters, which is great in this dish. I like to add some parsley for contrast, too.

Changes to the Recipe

The recipe here is the basic recipe but your are of course free to experiment a little with it. I.e. if you want to add a little more sweetness or can’t get the sweet bavarian mustard and don’t want to make it yourself, just add a bit of honey!
If you like your dressing a little more intense, use less of the broth.

You can use different kinds of “Wurst” here. If you have access to a German butcher shop, you might want to try this with some Zungenwurst or Blutwurst.

It doesn’t have to be Emmentaler cheese unless you are Swiss. Since imported cheese is often pricy, feel free to use a mild cheddar or other cheese from the country you are living in. 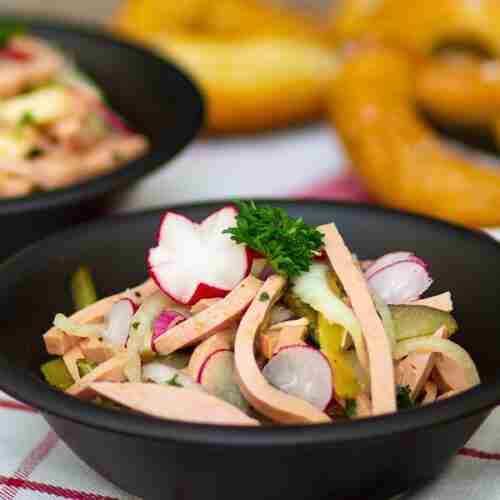