Asparagus Soup is part of the German Asparagus Mania … every year in May! About that time, fresh Asparagus comes to our farmer’s markets and people go absolutely nuts about it. For the majority of Germans, it has to be WHITE asparagus, I already mentioned this in the Chicken Pot Pie recipe. For many years it has been the only variety we knew.

For that reason, most people think that it is a different kind of asparagus. In their mind, they claim that the white one tastes better than the green one but it is really the same plant. It just grew differently. White asparagus is a little fancier because it is more work to grow it. It is also harder to harvest and also more work to prepare because you have to remove the skin. I really can’t see any benefit in white asparagus and for our asparagus soup I prefer to use the green one.

The Difference Between White and Green Asparagus

The white color (or better said “not color”) is the result of the way the asparagus grows until it is harvested. While the green asparagus grows out of the earth until it is time to harvest, for the white color it is not meant to see the sunlight. As soon as it is almost breaking through the crumb of the soil, workers have to pile soil on top to keep it under the earth. This has to be repeated again and again as the asparagus grows until it is harvested before sunrise.
So the first time it ever meets a ray of sunshine is after it was cut. Due to the constantly surrounding of soil, the white asparagus grows a hard skin, which one has to remove with a peeler before cooking. Some market stands have a machine that does it for the customers – extra charge included.

Asparagus is packed with vitamins like A, B, C, and E. It also contains Vitamin K, which is essential for the blood clotting process. One pound of asparagus can actually satisfy your daily need of vitamin C and folic acid and half of the need on vitamin B1 and B3! It is also a great source of minerals! The green asparagus has more vitamin C than the white one. Both varieties are great for the bones, teeth, and Cardiovascular system and especially pregnant women benefit from folic acid.

This said, there is also a word of warning for people who have health problems with their kidneys. If this applies to you, better only eat a little asparagus, because it creates a high amount of uric acid. This also means that people with gout shouldn’t eat asparagus for the same reason.

The fancy smell of urine after consuming asparagus happens to 40% of the people and is no reason for concern.

We serve Asparagus Soup nearly year-round because you could also use the vegetable from a can or jar. I prefer fresh vegetables because vitamins always get lost when it is on the shelf.

But most people prefer to eat their fresh asparagus cooked “al dente” (not entirely cooked through). They add some sauce hollandaise, some fresh, raw smoked ham (not the one you know from Canada or so) and scrambled eggs, and maybe some potatoes from the new harvest.

Yeah, as I mentioned at the beginning of the post: Germans go absolutely nuts about asparagus! 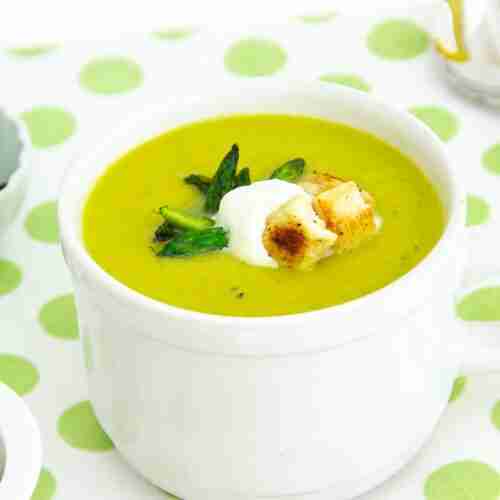